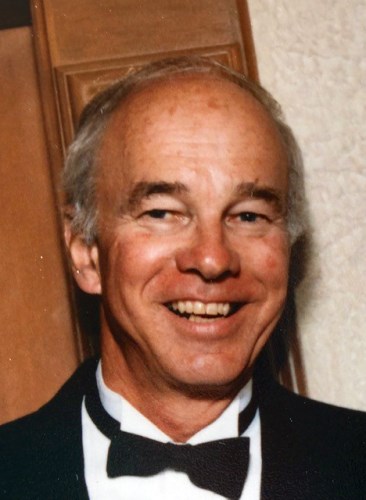 Ted (Theodore) J. Forke, wonderful husband, father and accomplished businessman passed away February 11, 2021 in Lincoln, Nebraska at the age of 87. Ted was born in Lincoln, April 7, 1933, to Albert & Molly (Linke) Forke. He was a graduate of Lincoln High and went on to attend the University of Nebraska. He enlisted in the Army and was stationed in Fort Benning, GA. He returned to Lincoln after his Army discharge where he completed college and earned a Bachelor of Science degree in Business from the University of Nebraska.

On August 3, 1954 he married Marlene B. Rees, and together they had 2 children, Kristen and Kent. After graduating from college he joined the family business, Forke Brother Auctioneers where he became a partner. He spent his entire career with Forke Brothers and retired in 1995 when Forke Brothers sold their company to Ritchie Brothers. Ted was active in Lincoln business by serving on the Boards of National Bank of Commerce, Nebraska Nature Conservancy and Security Mutual. He was also a member of Westminster Presbyterian Church.

After his retirement, Ted and Marlene loved spending the majority of time with family in their home in Aspen, CO. Ted loved the Colorado mountains where he enjoyed his horses, hiking, skiing and volunteering as Forest Ranger with the US Forest Service. After Marlene's passing in 2013 Ted enjoyed the company of longtime friend Marilyn Maude and together they enjoyed traveling and building a home in the country.

Ted was cremated. There will be a memorial service or celebration of life at a later time when the weather is more favorable and Covid restrictions lessened. Memorial donations can be made to Nebraska Nature Conservancy, 1007 Leavenworth Street, Omaha, NE 68102 or donor's choice organization. Condolences online at Roperandsons.com

To plant trees in memory, please visit our Sympathy Store.
Published by Lincoln Journal Star on Feb. 21, 2021.
MEMORIAL EVENTS
No memorial events are currently scheduled.
To offer your sympathy during this difficult time, you can now have memorial trees planted in a National Forest in memory of your loved one.
Funeral services provided by:
Roper and Sons
GUEST BOOK
3 Entries
Kristen and Kent. Your Father was a great man and I was blessed to have known him. My condolences.
Joe Baumert
February 23, 2021
Ted and Marlene were long time friends. Sorry about Marlene´s passing and now Ted. They will be missed by friends and us. We have missed Marlene and now Ted. Rest in peace
Dick and Barb Beechner
February 21, 2021
Condolences and Prayers to the Family -- The Forke's were a Wonderful Family-- I Took care of his Mother's Lawn and Snow Removal for Many years -We Lives next Door to his Mom and I took Typing Lessons from his mother Molly Again Prayers for the Family a Great Loss
Don Miltner Jr
February 21, 2021