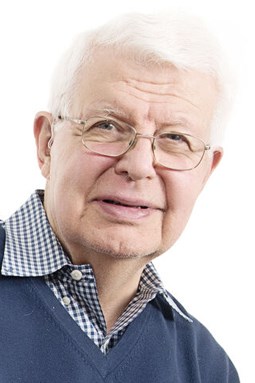 The family of William Towle (Bill) Bedwell is honoring the first anniversary of his passing with this memorial. Bill died on February 27, 2020, surrounded by his four children and with joyful thoughts of finally reuniting with his beloved late wife, Linda. Bill was 84. The dementia he suffered for far too many years took everything from him but his kindness and loving nature.

He was utterly devoted to his family. He was the compassionate, attentive, patient father that every child deserves, attending every one of his kids' events and staying up to the wee hours during our teen years to make sure we made it home safely. He could always be counted on for math advice, moral support, and late-night snacks. He was the sweet "Boppy" that delighted his grandchildren, even in his illness, with special treats and unexpected comic moments. His special ice cream sundaes were legend. In his last years, he couldn't recall that his wife had passed but he never forgot our faces, our names, or how much he adored us.

Bill was born to Harold and Mary Towle Bedwell on May 29, 1935 in Falls City, Nebraska. Bill was an All-Metro member of the Falls City High School Tigers football team and also played basketball and ran track. He attended The University of Nebraska, Lincoln, graduating with a degree in Electrical Engineering in 1957. He remained a passionate Cornhusker's Football Fan his whole life.

He enjoyed many extra-curricular activities throughout college, including member of Beta Theta Pi Fraternity, President of the University's Kosmet Klub and a cadet with the U.S. Air Force ROTC. He also became pinned to his high school sweetheart, Linda Buthman, an inevitable milestone in his view. The couple married on June 9, 1957 and moved to Biloxi, Mississippi to fulfill his duties with the United States Air Force as a flight instructor at Keesler Air Force Base. Linda and Bill return to Falls City in the early 60s, where Bill worked for the Bedwell family businesses and participated in the community as a Mason and member of the Elks Club.

In 1964, they moved their growing family to Omaha so that Bill could join the management team at Northwestern Bell Telephone Company. They were active members of the Omaha community for 47 years, until 2011, when Linda's sudden illness caused them to move to Minneapolis to be near family.

Bill pursued a diverse, 43-year career in fields ranging from electronics and residential development to information technology. A life-long learner, he was among the first Business Information Architects to support the IT department at Omaha Public Power District and developed their first electronic billing system. He earned his Master's Degree in Business Administration & Management Information Systems at the age of 57. He was a proud member of the Rotary Club of Omaha for more than 4 decades, where he served as scholarship director and received a Paul Harris Fellow Award in honor of his contributions to The Rotary Foundation. He served as an usher at All Saints Episcopal Church for more than 20 years.

An avid sports enthusiast, Bill enjoyed tennis, golf, and running. One of his favorite events was the Omaha Corporate 5K Run. As a boy, during summer trips to his family's cabin in Eldora, Colorado, he developed a love for fly fishing, a passion he shared with his sons. For his 60th birthday, his family surprised him with "Bill's Big Sky Adventure", an epic fly-fishing trip to Montana that was one of the last trips he was able to enjoy before dementia set in. His thank you note captured his favorite moments of family fun, float trips, catching Big Browns and Golden Trout. He wrote, "It was an event I will always look back on with fond memories and will never forget." It's our sincere hope that, reunited with Linda, Bill is finally able to recall the moments of that magical week and all the treasured memories of his beautiful life. Granddaughter Mattie perhaps best captures Bill's legacy in her tribute to him: "Boppy's legacy has many accolades. But out of all of them, his biggest accomplishment is eternalizing his love for generations to come."

The family would like to extend our heartfelt gratitude to the staff at Walker Care Suites, Edina, and to the team at Allina Health Hospice for the many kindnesses and comfort they provided Bill and to us during his last years.

"Love is patient, love is kind. It does not envy, it does not boast, it is not proud. It always protects, always trusts, always hopes, always perseveres. Love never fails."- From 1 Corinthians

To plant trees in memory, please visit our Sympathy Store.
Published by Lincoln Journal Star on Feb. 28, 2021.
MEMORIAL EVENTS
No memorial events are currently scheduled.
To offer your sympathy during this difficult time, you can now have memorial trees planted in a National Forest in memory of your loved one.
GUEST BOOK
1 Entry
Thank you for your Service May you be Granted Golden wings to carry you on your Journey to a Restful Peace
Francis Durham VFW Dist 10 Chaplain
February 28, 2021