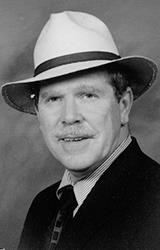 Brandt was an editor at newspapers in six states. He retired in 2007 after a long career at The Journal Times in Racine, Wis.

He began in journalism as a reporter with his hometown newspaper, The Vineland Times Journal in N.J. He worked at The Press of Atlantic City and then went on to become an associate editor, city editor, managing editor, and editor at newspapers in Merced, Calif.; Norwich, Conn.; Marion, Ind. and Kent, Wash. Brandt won many state, regional and national awards for his news, features, and column writing and was known in the industry for his dedication to ethnic and racial diversity in news coverage, newsroom staffing, and promotions.

In retirement, he was a contributing op-ed columnist at The Dallas Morning News. He was a family historian and genealogist and researched and wrote extensively about his relatives and ancestors. Along the way, Brandt earned a B.A. degree in history and an M.A. degree in management from Thomas Edison University in N.J.

He is survived by his daughter, Mary A. Brandt and son-in-law Robert L. Pagnani of New York City; a stepdaughter, Taryn Shapiro (Daniel) of Plano, Texas; a brother, Mark "Mickey" Brandt (Cecilia) of Vineland; two sisters, Deborah Brandt (Stephen Wajda) of Ocean City, N.J.; and W. Jane Brandt of Elmer, N.J.; four step-grandchildren and several nieces and nephews. He was preceded in death by his wife Bonnie J. Hollis and his stepson Timothy Hollis.

To plant trees in memory, please visit our Sympathy Store.
Published by Racine Journal Times on Oct. 28, 2020.
MEMORIAL EVENTS
No memorial events are currently scheduled.
To offer your sympathy during this difficult time, you can now have memorial trees planted in a National Forest in memory of your loved one.
GUEST BOOK
2 Entries
An honorable and class individual. I always enjoyed time spent in Randy's company.
Mickey Puskar
Friend
October 30, 2020
A man of principle. A quality person.
Jay Greenblatt
Friend
October 28, 2020