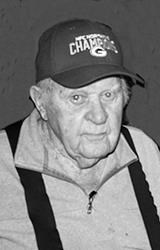 On February 27, 1954, Glenn was united in marriage to Shirley Ann Seitz at St. Sebastian Catholic Church where they were longtime members. She preceded him in death on October 16, 1984. Glenn farmed with his father and his son, Mike, on Braun Road all his life. In his spare time, he enjoyed restoring tractors, snowmobile racing and playing baseball in his younger years. Glenn will be best remembered for his great love for his family.

To plant trees in memory, please visit our Sympathy Store.
Published by Racine Journal Times on Nov. 25, 2020.
MEMORIAL EVENTS
Nov
28
Visitation
9:00a.m. - 10:30a.m.
St. Sebastian Catholic Church
3126 95th Street, Sturtevant, Wisconsin
Nov
28
Mass of Christian Burial
10:30a.m.
St. Sebastian Catholic Church
3126 95th Street, Sturtevant, Wisconsin
Nov
30
Interment
11:30a.m.
Calvary Cemetery
Funeral services provided by:
Maresh-Meredith & Acklam Funeral Home
GUEST BOOK
6 Entries
Mike just found out about your father passing. So very sorry. He was a great man.
Ron & Carol Hoegsted
November 29, 2020
I would like to wish my deepest sympathy to the Mueller Family. I know Glen and my dad, Don Sr. were terrific friends. They spent many years as friends and companions. So sorry I am not able to attend. I had just found out about his passing this morning. Prayers to all Glen´s family and friends. Sincerely, Don Wilson JR.
Donald Wilson Jr.
November 28, 2020
Mike, we are so sorry to hear of your Dads passing. Our thoughts and prayers to you and your family during this tough time.
Dennis and Margaret Haag
November 27, 2020
I remember going to his house for family picnics when I was a kid. My Dad, Dick Arndt was his cousin. Prayers to his family.
Diane Arndt Kamm
November 26, 2020
Nancy, so sorry for your loss! Hugs and prayers.
Carol Smith
November 25, 2020
Dear Cathy,Mike and Joy Our deepest condolences in the passing of "Farmer"!!! Always heard great stories about him, from my Sister Jo! Praying and sending hugs to you all and the Mueller Family! RIP Mr Glenn
Clara and Don Pappenfuss
November 25, 2020