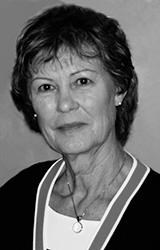 RACINE - Helga Anneliese Gardetto passed away peacefully on November 20th surrounded by her husband and children. She was born in Dittlesheim, Germany on November 8, 1938 to Gottlob and Else Bootz. Helga was the eldest of four children; she had three brothers, Gerhardt, Werner, and Bernd.

Helga experienced childhood in the midst of WWII. Bombs fell on nearby cities and her family often took refuge in wine cellars, part of the family's small business. She recounted seeing a bombed building, with only the plumbing left intact, and remembered thinking: "How will anyone get that bathtub down from the fourth floor?!" No challenge or goal was too great, an attitude she maintained throughout her life.

Helga met her husband, Dr. Peter Gardetto, in 1956. He was serving in the U.S. Army as a Pediatrician, stationed in Mainz. When he first saw her, he turned to a friend and said, "I am going to marry that girl!" They were married in Die Kirche St. Ludwig in Ludwigshaven, Germany on May 6, 1957. Their 63 years of marriage is testament to his intuition, her good judgment, and the love they shared.

After the wedding, Helga became an American citizen and they moved to Bay View, Wisconsin. Peter's parents (August and Mary) and the extended family welcomed her with open arms. She learned English in a tight knit Bay View community where Piedmontese (an Italian dialect) was spoken, and she came to know her new "cousins." Sixty years later, "the cousins" still met for lunch every month or so.

On April 1, 1960, Peter joined the Kurten Medical Group as their sixth physician, and the family settled in Racine. They formed many lasting friendships as they celebrated holidays, the births of children, and other milestones, not the least of which was the annual Fourth of July party on Charles Street!

Helga was always stylish and well-spoken, a supportive and loving wife and mother who maintained an avid interest in her children's and grandchildren's education and extracurricular activities. In the mid 70's, she briefly taught German at The Prairie School. She also helped import and market Roll-Bootz wine from her family's craft winery.

She loved cooking, gardening, State Fair cream puffs, TV Mysteries, trips to Florida, spending time with her family, and the Packers (especially Brett & Aaron). True to her heritage, she relished driving her car, but sometimes struggled with the speed limit. She was a fiercely independent woman who will never be forgotten by those she loved. We were blessed to have had her and are sustained by the memories of her great love for us.

Many have been so kind, but a special thanks to Bill and Nicole Reid, Mike and Jayne Gasperi, and Michael Bootz who visited often.

Due to Covid-19 private services will be held with interment at Mt. Olivet Cemetery, Milwaukee.

To plant trees in memory, please visit our Sympathy Store.
Published by Racine Journal Times on Nov. 25, 2020.
MEMORIAL EVENTS
No memorial events are currently scheduled.
To offer your sympathy during this difficult time, you can now have memorial trees planted in a National Forest in memory of your loved one.
Funeral services provided by:
Maresh-Meredith & Acklam Funeral Home
GUEST BOOK
1 Entry
Helga will be deeply missed when again the cousins can gather for those lunches she brightened. We love those get togethers and know her spirit will be with us when Pudge, Susie, Frank, Jane, John, Mary, Paul, Jeanne and our paterfamilias, Peter, assemble once more. Perhaps Peter will lead us as in a prayer of grace and gratitude, in Piedmontese, for having the privilege of knowing this lovely lady.
Paul Troglia
November 26, 2020