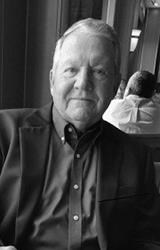 James "Jim" Oscar Erickson, 79, formerly of Racine, Wisconsin, passed away on November 16, 2020, in Fort Myers, Florida, with his family at his side.

Jim was born to Oscar and Florence Marie Erickson on July 3, 1941, in Menominee, Michigan. He grew up on the family farm in Stephenson, Michigan, and graduated from high school in 1959. On July 21, 1962, he married Patricia "Pat" Ellen Beggs of Racine, Wisconsin. Together they raised four daughters, enjoyed camping, travel with family and friends, and were very active in church and their community.

After high school, Jim moved to Racine and began what would become his lifelong career at S.C. Johnson & Son. He started on the production line, then transitioned to maintenance and eventually management. After more than 40 years of service, he concluded his career as the director of facilities. Along the way, he completed technical college courses and firefighter certifications to help him advance his career. He was very proud of his work, and a few years ago said his time with the company "was more than I could have ever dreamed of, to be able to work there and move up in the company the way I did."

Jim was very active at Racine Bible Church, serving as an elder and youth group leader for many years. He was also instrumental in facilitating the process of building the new church. Throughout his life, as evidenced by the outpouring of gratitude upon his death, he had an extraordinary, positive impact on countless lives and loved to share his faith. His favorite Bible verse is 2 Corinthians 2:9, "However, as it is written: What no eye has seen, what no ear has heard, and what no human mind has conceived – the things God has prepared for those who love him."

Jim also had a lifelong passion for baseball, starting on a team with his older brother that was coached by their father, then playing for a variety of teams in Racine, coaching youth teams, mentoring young professional baseball players, and working with the Brewers as a volunteer. At his core, though, Jim was a die-hard Cardinals fan, picking up his enthusiasm for this team from his dad, who used to listen to the Cardinals play on the radio when Jim was growing up.

After retiring, Jim and Pat moved to Fort Myers, Florida, where they, along with many friends and family from Racine, enjoyed an active retirement and as much golf as Jim could manage. He was also active on the board at the Fairways at Eagle Ridge and continued to be known for his generosity, quick laugh, gratitude, and kind heart.

Jim will be buried alongside his beloved mother, father and sister at a private family ceremony in December at West Lawn Memorial Park in Mount Pleasant, Wisconsin. A celebration of life will be held in Wisconsin next year. In lieu of flowers, the family requests that donations be made to Samaritan's Purse, Hope Hospice House (Fort Myers) or the Alzheimer's Association.

To plant trees in memory, please visit our Sympathy Store.
Published by Racine Journal Times on Nov. 25, 2020.
MEMORIAL EVENTS
No memorial events are currently scheduled.
To offer your sympathy during this difficult time, you can now have memorial trees planted in a National Forest in memory of your loved one.
Funeral services provided by:
Fort Myers Memorial Gardens Funeral Home
GUEST BOOK
2 Entries
My deepest sympathy to Pat and the rest of Jim's family. He is in that place that all of us long for who have put their faith and trust in Jesus Christ.
Gene Tarwid
November 26, 2020
May God comfort you. Jim was a lovely man, my late husband, Bill, thought very highly of him as his manager. Always positive, calm, and helpful. May perpetual life shine upon him.
Janet Mitchell
November 25, 2020