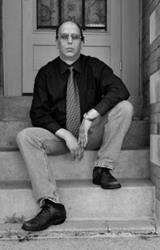 Jim died unexpectedly at his home on November 12, 2020. He was a loving son, brother, and Uncle. He was a kind and gentle soul with an incredible sense of humor who was always willing to lend a helping hand.

Jim was born January 24, 1966, to Raymond and Diana (Hagen) DeHahn. He attended St. John Nepomuk Catholic School and graduated from Wm. Horlick High School in 1984. He enjoyed Scouting and earned the rank of Eagle Scout. Jim briefly attended UW - Platteville to study Criminal Justice. He later enlisted into the U.S. Army National Guard, serving his country with the 32nd Military Police and served in Desert Storm. Later, he served his community as a deputy for the Racine Co. Sheriff's Dept.

Jim is survived and dearly missed by his siblings, Matt (Sherri) DeHahn of Marengo, WI, Tom (Suzanne) DeHahn of Homewood, IL, Phil (Anne) DeHahn of Mt. Pleasant, WI, Christine (Jeffrey) Panka, and John (Lisa) DeHahn of Mr. Pleasant, WI. Along with numerous nieces & nephews as well as Aunts and Uncles. He was proceeded in death by his parents, Raymond and Diana (Hagen) DeHahn.

A private memorial and interment with military honors will be held at a later date.

Memorials can be made in Jim's memory to a Veteran's Support Organization of your choosing.

To plant trees in memory, please visit our Sympathy Store.
Published by Racine Journal Times on Nov. 18, 2020.
MEMORIAL EVENTS
No memorial events are currently scheduled.
To offer your sympathy during this difficult time, you can now have memorial trees planted in a National Forest in memory of your loved one.
Funeral services provided by:
Purath-Strand Funeral Home & Crematory
GUEST BOOK
0 Entries
Be the first to post a memory or condolences.