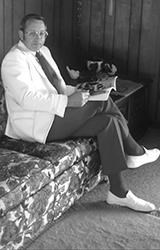 Marvin was born in Ord, Nebraska on July 22, 1927, the son of Glenn Bosteder and Edra (nee: Hartung). He spent most of his life in Racine, Wisconsin, and retired in Homosassa, FL.

Marv served in the U.S. Army in Germany after World War II and was honorably discharged 26 Feb 1947. He immediately went to work for S.C. Johnsons (a Racine, WI company he was proud to work for and greatly respected) before retiring 40 years later on March 31, 1987.

To those who knew him as Dad, Daddy, Pa, Grandpa and Marv, they remember his love of cars and how meticulously he kept them in perfect condition and always wanted a fresh coat of wax on a car, how generous he was with his time to help out neighbors, his perfection with his home and yard, his love of bing cherries, his great sense of humor and belly laugh, playing card games with family, and of course a freshly made chocolate cake with 1-1/2 times Penuche Frosting "was as fresh as it gets!"

To plant trees in memory, please visit our Sympathy Store.
Published by Journal Times on Sep. 20, 2020.
MEMORIAL EVENTS
No memorial events are currently scheduled.
To offer your sympathy during this difficult time, you can now have memorial trees planted in a National Forest in memory of your loved one.
GUEST BOOK
5 Entries
So sorry for your loss,Donny and I will hold you Joan, and all of your’
Family up in prayer. He was a good man.and we know he will be missed.
Marie Trudeau
Friend
October 4, 2020
We were richly blessed to have Marv and Joan as good friends. Marv always kept Jesus, his Lord and Savior, the center of his life. Heaven has gained wonderful soul.
Anita & Jerry Czack
Friend
September 23, 2020
MY DEEPEST SYMPATHY TO JOAN AND THE FAMILY.
SINCERELY,
NICK THIELEN
NICK THIELEN
Friend
September 21, 2020
Marvin was a faithful attendee of our Neighborhood Bible Study for years. A faithful man who loved his wife, Joan, and love his Lord Jesus. We are rejoicing that his work is now done and he's resting with his Lord.
Bob and Dottie Radcliffe
Friend
September 20, 2020
Marvin was a very giving and caring man. He will be missed.
Jack and Georgette Tozer
Friend
September 20, 2020