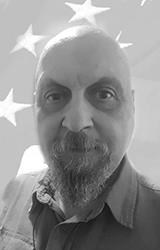 Paul was born in Racine, WI on July 18, 1949 to the late Francis "Frank" and Mabel (nee: Jarstad) Rice. He was a 1969 graduate of Washington Park High School. He went on Kenosha Technical College before studying mechanical engineering at Milwaukee School of Engineering and Lorenz University. Proud of his country, Paul served with the United States Air Force in Germany.

A true love match, he was united in marriage with Margaret Herdt on October 26, 1985. He often said "she is my everything"! Paul began his career with American Motors before being transferred to Troy, MI to work for Chrysler. While in Michigan, he also was employed as a lead design engineer at Tunkers North America, senior project manager at MTS North America, former quality manager at Bleichert and facility program manager at BASF.

Paul was a great resource for IT & computers. He was a great computer mentor for his sister, JoAnn and sisters-in-law, Joan & Rita. They thought Paul was exceptionally funny and talked with him almost daily. He could often be found on peaceful walks in the woods and would make walking sticks out of tree branches he found along the way, often sharing them with family members & local nursing homes. Above all, Paul & Margaret were the "babies" of their families and, as such, were especially loved always by their older siblings.

Due to the worldwide pandemic, private services will be held with entombment at Southern Wisconsin Veterans Memorial Cemetery. In memory of Paul, offer a kind deed to someone in need.

To plant trees in memory, please visit our Sympathy Store.
Published by Racine Journal Times on Nov. 25, 2020.
MEMORIAL EVENTS
No memorial events are currently scheduled.
To offer your sympathy during this difficult time, you can now have memorial trees planted in a National Forest in memory of your loved one.
Funeral services provided by:
Draeger-Langendorf Funeral Home & Crematory
GUEST BOOK
1 Entry
So very sorry to hear of your loss Margie, or I guess it's Margaret now! Have thought of you and your family often over the years. Prayers for you and now especially Paul. We are still here in Racine. Missing you, Myrt,
DAVID HARTLEY
November 25, 2020