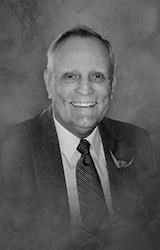 Dick was born in Racine on March 4, 1932 to Stephen Kizewic and Anne (nee Valukas) Kizewic Black. He was very proud of his Lithuanian heritage and visited with his Lithuanian family on the family farm. Dick served in the U.S. Marine Corp during the Korean Conflict and received honors for intramural athletics. On October 30, 1954, he married his lifetime sweetheart, Shirley M. Chapek, celebrating 59 years of marriage. He courted her since the third grade. She preceded him in death on October 11, 2013. He was employed by Gorton Machine and Cast Masters. After leaving Cast Masters, Dick graduated from U.W. Parkside where he received his teaching degree and coaching certificate at 40 years old. Dick taught Social Studies, History and American Indian History at Park High School for over 25 years. He was voted one of the top 1000 teachers by his students. Dick was a Horlick High School Graduate of Distinction and served on the committee for the Horlick Golf Outing. He was a proud graduate of Horlick and was Homecoming King and known for his prowess in athletics. Dick was a scout for the Park High School Basketball Team. He was an avid sportsman, actively involved in city softball and basketball leagues. He was honored at the Old Timers Tournament. Dick spent 25 years of his life collecting information in his many travels and produced two historically accurate calendars of the old west and they are registered in the Library of Congress. Dick and Shirley were avid supporters of the National Parks, environmental groups, and St. Labre American Indian Schools. He visited every historical trail, Indian reservation, and battleground during his lifetime. He was a passionate historian.

Survivors include his children, Richard "Rick" Kizewic and Joan M. Rediske; grandchildren, Kelli (Justin Kacher) Rediske and Jacob Rediske; and his sisters and brothers, Alice Kizewic, David (Nancy) Kizewic, Stephen Kizewic, and Eunice Black Beach. Dick is also survived by other relatives and many friends. He was preceded in death by his parents; his son-in-law, Roger Rediske; and sister-in-law, Darla Kizewic

A memorial visitation for Dick will be held at the funeral home on Sunday afternoon, November 29, 2020 from 1:00 p.m. until 3:00 p.m. Due to the COVID pandemic and City of Racine Health Department guidelines, a private family memorial service will take place followed by Full Military Honors. In lieu of flowers, memorials may be directed to Camp Anokijig, the Horlick High School Graduates of Distinction or the Horlick High School Golf Outing.

To plant trees in memory, please visit our Sympathy Store.
Published by Racine Journal Times on Nov. 25, 2020.
MEMORIAL EVENTS
Nov
29
Visitation
1:00p.m. - 3:00p.m.
Purath-Strand Funeral Home & Crematory
3915 Douglas Avenue, Racine, WI 53402
Funeral services provided by:
Purath-Strand Funeral Home & Crematory
GUEST BOOK
13 Entries
I was in Dick's Horlick class. We were not close, but I am saddened by his passing. He was always a colorful, energetic guy. I knew his wife, Shirley quite well and just learned that she predeceased him. They were a part of the high school life that I remember. I think I called him "The Wick." His loss is a loss to me. My condolences to his children.
Stuart Faber
December 21, 2020
He was a wonderful man, may he Rest In Peace. My prayers and thought go out to the family
Bonnie Bouchard
December 7, 2020
Kiz was the absolute best! I remember him fondly, especially today as we recall the anniversary of Pearl Harbor December 7, 1941. I wasn´t much of a history fan back in high school, but he assured me I´d pass his class if I could remember the importance of this date. I came to realize there was so much more to simply memorizing the date which is precisely why he was a great teacher. History fan or not, I became his teacher´s aide and we´ve been friends since. My heart breaks for the Kizewic family, loved-ones, and friends. It´s never easy saying goodbye to such a great person. We can honor him by showing others the kindness and good humor he shared with us.
Jennifer Wilkinson-Weber
December 7, 2020
I took Racine History from him at Park High School. What a fun teacher he was! He brought us to mound cemetery to learn about the Indian Mounds. He helped me to appreciate Racine and love history. If he was such a great teacher, he must have been a wonderful Dad. So very sorry for your loss.
Jennifer Poppler
November 30, 2020
Sorry for your. Loss
Mark Celeste juile kister
November 30, 2020
I will remember Dick for his love of his family and sports. Dick and Shirley always attended any family function or activity involving their children or grandchildren. He was a sports enthusiast and I knew him to be active in the senior softball league, while always asking me how I still enjoyed playing baseball. I will miss seeing him and just chatting about sports in general.
K. Scott Abrams
November 29, 2020
Dick was one of the original Rebel Golf Committee Members and could see the value of the program. He was a great team member and will be missed by many.
Jay Hammes
November 29, 2020
Our deepest of sympathy to our family. He was a kind man. He had such love of the old west and we will remember him fondly.
Dale and Valli Kizewic
November 28, 2020
Coach loved Park hoops and it was a joy to speak with him each and every time I was lucky enough to. RIP Kiz' you influence was great.
Jack LeRose
November 27, 2020
MY DEEPEST SYMPATHY TO THE KIZEWIC FAMILY. I WAS FORTUNATE TO HAVE GOLFED WITH DICK ON THURSDAY MORNINGS AT IVES. ALSO, REMEMBERED THE YEARS SPENT ON JACKSON STREET. GREAT GUY! SINCERELY, NICK THIELEN
NICK THIELEN
November 25, 2020
Dick was our SUPER BASKETBALL SCOUT for Park Basketball when I was coaching. He did a great job . I was lucky to know Richard and he was a great HISTORIAN. His loyalty to his HORLICK classmates is the stuff that movies are made about. Coach Sager
Tom Sager
November 25, 2020
Richard was a great husband, father, teacher, teammate and friend who will be truly missed. "A beautiful life has come to an end. He died as he lived, everyone´s friend. In our heart a memory will always be kept. Of one that we loved and will never forget."
Bob Jaklich and Family
November 25, 2020
Coach Kizewic was my YMCA baseball coach in the 1960´s. He was a positive influence in my life. You have my deepest sympathy. Thank you coach!
Ed Morelli
November 25, 2020