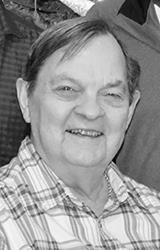 Wayne Joseph Christman, age 81, passed away on Saturday, November 7, 2020 after a long battle with dementia and other chronic medical conditions. Wayne, the oldest of four, was born February 22, 1939 in Burlington, WI to the late Lester and Alvira (Miller) Christman. Wayne graduated in 1957 from St. Mary's High School in Burlington. He then served in the US Marine Corps for three years and was stationed at Camp Pendleton, CA and Kodiak, AK. After returning from his military service he married Nancy Roberts June 29, 1963 and they had three children and lived most of their married life on Brown's Lake near Burlington. Wayne enjoyed making wine for all to share as well as hunting with his sons and other family.

Wayne was an alumnus of Marquette University in Milwaukee WI class of 1964 where he received a Bachelor of Science degree in accounting. He worked 2 1/2 years for the US Internal Revenue Service in Milwaukee working in the field audit division and in claim screening before opening his own tax and accounting business in Burlington beginning in 1966. Wayne became a CPA in 1970 and was a member of AICPA and WI Society of Public Accountants. After a long and successful career, Wayne sold his business in 2000 and later retired.

Wayne was a lifelong member of St. Mary's Catholic Church in Burlington and more recently a member of St Mary's of the Immaculate Conception in Greenville, WI. He was also a member of Milwaukee Catholic Charismatic Renewal and belonged to Milwaukee CCR Intercessors, River of Life Prayer Group, participated in prayer ministry, Inner Healing, and Theophostic Prayer Ministry. Wayne and his wife Nancy ministered on retreat weekends and in Israel with Sr. Francis Clare Schares, SSND and in the British West Indies with the Caribbean CCR leadership before, during and after annual National Caribbean Conferences from 1995 through 2004 using the Gifts of the Holy Spirit. Wayne moved with his wife Nancy to the Fox Valley area in 2013 to be closer to their sons and most recently lived at the Valley VNA in Neenah, WI.

Due to the current circumstances, a private service will be scheduled at a future time for Wayne. Burial will be at St. Mary's Catholic Cemetery in Burlington, WI.

In lieu of flowers, his family asks that you make a donation to Aurora at Home Hospice, Valley VNA Senior Care in Neenah WI, or the Alzheimer's Association, in memory of Wayne.

To leave a special memory or condolences with Wayne's family, please visit kesslerfh.com.

To plant trees in memory, please visit our Sympathy Store.
Published by Racine Journal Times on Nov. 13, 2020.
MEMORIAL EVENTS
No memorial events are currently scheduled.
To offer your sympathy during this difficult time, you can now have memorial trees planted in a National Forest in memory of your loved one.
Funeral services provided by:
Kessler Funeral Home - Neenah
GUEST BOOK
0 Entries
Be the first to post a memory or condolences.