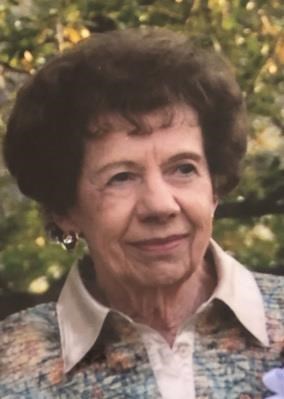 Carol was born in Milwaukee, WI. She graduated from Rufus King High School and Prospect Hall Business College. In 1948, she married her best friend, Robert Jonas. They had two children, Jeffrey and Christine. In 1998, Bob died while they were traveling with Elderhostel on a barge trip through France. The couple was blessed with over 50 years of marriage.

Carol spent her early years in Milwaukee working as a Human Resource Director for various companies, including Valuation Research. She and Bob shared many interests including ballroom dancing, golfing, bridge, gardening and traveling. Together they attended over 18 Elderhostels throughout the United States and France. Both were avid supporters of the Milwaukee Symphony Orchestra and traveled to Japan with the Symphony in 1992. Carol was a member of the Milwaukee Symphony Orchestra League Board and a long-time member of The Suburban Woman's Club of Wauwatosa.

In 2006, she moved to Wisconsin Rapids and immediately became involved in the community and made numerous friends. She was a member of several women's groups including: The Yard and Garden Club, Current and Classic Book Club, and the service organization PEO. She was the cornerstone of many different bridge clubs including AAUW Bridge, Wednesday afternoon Bridge at Bullseye Golf Club and her special Sunday bridge group.

In her free time, Carol was a devoted gardener, a voracious reader and a skilled crossword solver. In recent years, her greatest joy was spending time with her grandchildren and great grandchildren whom she adored.

Carol was preceded in death by her parents, her husband, Robert Jonas, and a great-granddaughter, Caitlin Engel.

Carol was a woman of substance; civic minded, intelligent and engaging. She will be remembered as a devoted wife and mother, beloved grandmother and great-grandmother. Carol was deeply loved and will be greatly missed.

A Mass of Christian Burial and Celebration of Life will be held on Wednesday, July 21 at St. Dominic Parish, 18255 W. Capitol Dr., Brookfield. Visitation at 3:30 pm with a Memorial Mass to follow.

The family requests that memorial gifts be designated for NMO research at Mayo Clinic. Memorials can be made online at www.mayoclinic.org/deveopment or mailed to Department of Development, Mayo Clinic, 200 First St. SW, Rochester, MN 55905. Gifts in memory of Carol Jonas.


Published by Milwaukee Journal Sentinel from Jan. 1 to Jul. 18, 2021.
To plant trees in memory, please visit our Sympathy Store.
MEMORIAL EVENTS
To offer your sympathy during this difficult time, you can now have memorial trees planted in a National Forest in memory of your loved one.
Funeral services provided by:
Herman-Taylor Funeral Home and Cremation Center
MAKE A DONATION
MEMORIES & CONDOLENCES
Sponsored by Herman-Taylor Funeral Home and Cremation Center.
5 Entries
She was an accomplished bridge player; always enjoyed her presence at the bridge table!
Connie Landry
January 23, 2021
Our condolences to the Family of Carol Jonas. She was a wonderfully warm and intelligent person. She will be missed by all who knew her.
Kristine Dauenhauer
January 10, 2021
Carol was a sweet person. I had the pleasure of meeting her at bridal showers and baby shower. We talked like we were old friends and she was such a beautiful soul. Sorry for your loss.
Robin and Darrel Thurow
January 4, 2021
Dear Chris and family, I had a note card to send in the mail, but I'm afraid I will procrastinate. I a was sorry to read about the loss of your dear mom. I met her at Matt's Farm Day a few years ago. We talked about Brookfield and St. Dominic's. She was a delight. What a wonderful well lived life she lived. May God hold you tenderly as you travel the journey of grief. Warmly, Diane Miller
Diane Miller
Acquaintance
January 4, 2021
Sorry for your loss Courtney, and family. Glad you got to spend the time you did with your grandmother. Special memories and skills that she passed to you.
Kay & Dave Iwanski
January 2, 2021
Showing 1 - 5 of 5 results