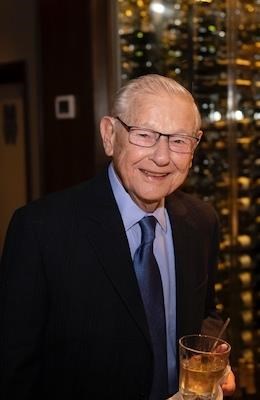 Harold was born on December 11, 1929 in Marshfield, Wisconsin to Rose (nee Bunin) and Louis Krom of Owen, Wisconsin. The family lived there until 1934 and then moved to Milwaukee. Harold attended and graduated from the Emanuel Philipp School and Rufus King High School. Following a year at the University of Wisconsin at Milwaukee, Harold enlisted in the United States Air Force where he served four years, including 22 months on the island of Guam. Following his discharge from the military, he returned to school and graduated from the University of Wisconsin at Madison. While at the University, he was affiliated with the Delta Sigma Pi fraternity.

Shortly after graduating, Harold moved to Texas and served as the executor of the N.B. Bunin Estate at Brownwood. Harold later returned to school and received his M.B.A. from Southern Methodist University in Dallas. After receiving his M.B.A. Harold earned his CPA License and worked for the Internal Revenue Service, retiring in 1987 as a Petroleum Industry Program Manager. He was a member of the Texas Society of CPAs for over 50 years as well as the American Institute of CPAs.

Following retirement, Harold pursued interests in travel, family history and genealogy. He was an Eagle Scout and an avid Green Bay Packers fan.

Harold is predeceased by brothers, Claire, Donald and his sister Jeane Zarne, and his best friend and companion of 20 years, Freda Vogel Bernstein.

A private funeral will be held. Please make donations to the charity of your choice.

Published by Milwaukee Journal Sentinel from Jul. 28 to Jul. 29, 2020.
To plant trees in memory, please visit our Sympathy Store.
MEMORIAL EVENTS
To offer your sympathy during this difficult time, you can now have memorial trees planted in a National Forest in memory of your loved one.
Funeral services provided by:
Blane Goodman Funeral Service - Mequon
MAKE A DONATION
Please consider a donation as requested by the family.
MEMORIES & CONDOLENCES
Sponsored by Blane Goodman Funeral Service - Mequon.
1 Entry
In loving memory of a wonderful person. He was a kind, gentle man who loved life.
George and Joan Deibert
Friend
August 8, 2020
Showing 1 - 1 of 1 results