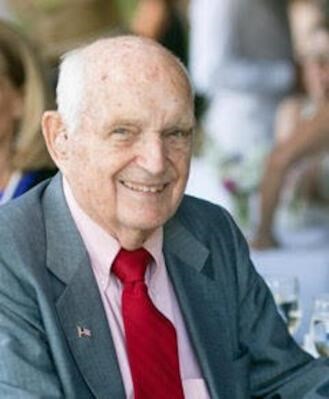 Milwaukee - Passed away peacefully on March 23, 2021 at 100 years of age. Born in Evanston, Illinois on January 28, 1921, he was the son of Arthur Earl Bryson and Helen Mandaville Bryson (Decker). Jack is survived by his sisters, Nancy Schlosser of Santa Barbara, Jane Klunder of San Diego, and his brother Arthur Bryson Jr. of Palo Alto. He was married to Elizabeth Ann Pain for 45 years until her passing in 1986. His second marriage of 33 years was to Olive Van Dyke Bryson, who passed in 2020. Survived by his children from his first marriage, Constance Smith, Mary Bancroft, Nancy Goulet, and John Bryson Jr. Also survived by numerous children and grandchildren of his first and second marriages.

A graduate of New Trier High School in Evanston, Illinois and Carleton College in Minnesota, Jack served honorably in both WWII and the Korean Conflict in the Army Air Corp and US Air Force. He had a long and accomplished life including starting his own small business, pursuing tennis, electronics and serving as a member of Christ Church Episcopal Church of Whitefish Bay, Wisconsin. Jack was a loving husband and devoted father. No memorial service is planned at this date. Donations may be sent to St. John's on the Lake in Milwaukee.

Published by Milwaukee Journal Sentinel from Mar. 31 to Apr. 4, 2021.
To plant trees in memory, please visit the Sympathy Store.
MEMORIAL EVENTS
To offer your sympathy during this difficult time, you can now have memorial trees planted in a National Forest in memory of your loved one.
Funeral services provided by:
Feerick Funeral Home - Shorewood
MAKE A DONATION
MEMORIES & CONDOLENCES
Sponsored by Feerick Funeral Home - Shorewood.
2 Entries
I knew Jack because i used to work parties for his second wife and many of her friends mostly NANA Allis
one time i came to their home on bridge lane and i walked into the gargage and saw a man on a ladder and asked him if Mrs Bryson was home and to my surprise it was Mr. Bryson and from that day forward i alwasy called him Mrs Brysons handy man

Carol Ihlenfeld
Carol Ihlenfeld
Acquaintance
April 14, 2021
The Bryson family arrived on our block of Kent Avenue, WFB, to the delight of all the kids on the block! We loved them all, and we remember "Mr. Bryson" as a very kind man, who loved his tennis! We rejoice that his children and grandchildren were able to know him over a wonderful, long life. My memories will remain strong.
Pam Dunlop Becker
Neighbor
April 6, 2021
Showing 1 - 2 of 2 results