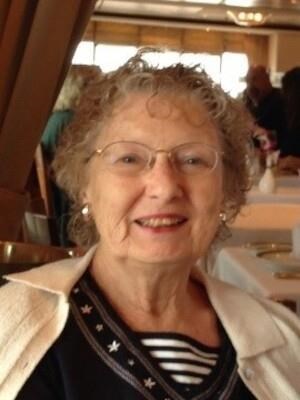 East Troy - Margaret Royal Hudson (May 24, 1936 - February 19, 2021) beloved wife of William J. Hudson, passed away at the age of 84. She died at home peacefully in East Troy, Wisconsin surrounded by her loving family. She is survived by her husband of 63 years, William J. Hudson of Kenilworth, Illinois, and their three sons, Jeffery (Joslyn), Scott (Haeran) and Robert (Joelle). Loving grandmother of Nicole, Heather, Stephanie, Sean (Lauren). Preceded in death by her older sister, Ann Royal Heffron and younger brother, Donald.

Peggy was born in Harrisburg, Pennsylvania to Donald K. Royal, Esq., and Margaret Douglas. She was the granddaughter of former Harrisburg Mayor, John Kelker Royal and his wife Rebecca E. Morgan. She grew up in Belleview Park and graduated from John Harris High School at which she was an honors student and a prolific volunteer for numerous high school and community needs. She attended Wells College and graduated from the University of Hawaii in 1958.

She was active in the Junior League of Harrisburg, Daughters of the American Revolution, and chaired the Women's division of the United Way of Central Pennsylvania. A member of the Board, she was a leader in the Garden Club of Harrisburg. When her husband's career took them to Asia, she became an active member of the American Club of Japan, College Women's Association of Japan, and chaired the Ceramics Association of Japan. She and her husband lived for nine years in Tokyo and Hong Kong. There she continued to expand her artistic skills, taught English, and enjoyed world travel. She was a long-standing member of the Lake Beulah Yacht Club.

An accomplished skier, she also loved boating and hiking. Finally, Peggy loved to travel throughout the world with her husband, children, and grandchildren.

In lieu of flowers, donations may be made in memory of Peggy to the Lake Beulah Sailing School, a 501(c)(3) organization, at P.O Box 729, East Troy, WI. 53120. Funeral and interment will be held privately. Arrangements by Schmidt & Bartelt Funeral Service in Mukwonago, WI.

To plant trees in memory, please visit our Sympathy Store.
Published by Milwaukee Journal Sentinel from Feb. 22 to Feb. 28, 2021.
MEMORIAL EVENTS
No memorial events are currently scheduled.
To offer your sympathy during this difficult time, you can now have memorial trees planted in a National Forest in memory of your loved one.
Funeral services provided by:
Schmidt & Bartelt Funeral and Cremation Services
GUEST BOOK
2 Entries
To Peggy’s Family I would like to express how sorry I was to read of her death. I was a friend and sorority sister of Peggy in John Harris High School in Harrisburg, Pa. I had not seen her for about 60 years. I now live in Lake Geneva, WI, which is very near her home in East Troy. I was in that city last Saturday and drove by the house but no one was home. Again please accept my sincere wishes to the family. Peggy’s high school friend, FrancesSzivos Fonner
Frances Szivos Fonner
Classmate
March 1, 2021
Dear Bill and family, My prayers and loving wishes go out to you. Hard to explain how I loved her and her family. My family (and I for a while) lived next to the Royals. As a child, I was fascinated by her mother, Margie, and Peggy was my hero. Thank you Bill, for helping us get together for lunch a few years ago, a more recent memory I will cherish. Dear Peggy will always be in my heart!
Emilie M. Kief
Friend
February 28, 2021