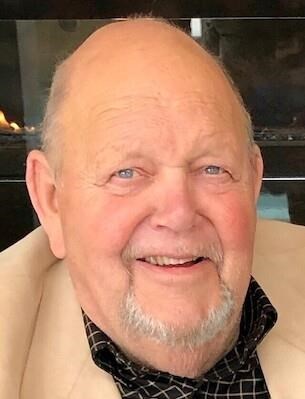 Bettendorf - Phil Schwister, 76, of Bettendorf, IA died March 4. He was born to Richard and Luella Schwister on February 3, 1945 in Milwaukee, WI. He graduated Rufus King High School in 1962, served in the Air Force, and graduated college with a business degree.

In 1980 he moved to Bettendorf, IA as the salesperson and branch manager for Cochrane Compressor in Rock Island for 33 years. Phil was self-motivated, and a tremendously hard worker.

He was a member of First Presbyterian Church in Davenport, and member of Tips Club of Moline. He volunteered at the Boys and Girls Club, and when his children were younger they were all active members of Indian Guides and Princesses with his name fitting perfectly; Bald Eagle.

His joys were woodworking, golfing, watching the Iowa Hawkeyes and Green Bay Packers, playing cards (especially bridge), traveling, telling a story, musicals, and dancing. Most of all, he loved cheering for his children and grandchildren in their athletics and beyond.

His favorite song was Louis Armstrong's "What a Wonderful World," and when his family thinks of him no longer suffering, they see the trees of green and red roses too.

Memorial contributions can be made to Palmer Golf Course, where he will have a bench in his honor on the 13th hole, and First Presbyterian Church of Davenport, IA. A memorial gathering will be planned for a later time.


Published by Milwaukee Journal Sentinel from Mar. 7 to Mar. 14, 2021.
To plant trees in memory, please visit our Sympathy Store.
MEMORIAL EVENTS
To offer your sympathy during this difficult time, you can now have memorial trees planted in a National Forest in memory of your loved one.
Funeral services provided by:
Cunnick-Collins Mortuary - Davenport
MAKE A DONATION
MEMORIES & CONDOLENCES
Sponsored by Cunnick-Collins Mortuary - Davenport.
3 Entries
Phil was a homework helper for the boys and girls club, and there was a little boy who was very shy of men, because his family situation had not exposed him to good men. Phil took this little boy under his wing, and after two years of coming to Phil, this little boy, who had walked in with his head down and was very timid had changed to a confident 4th grader who came into the homework room with clear eyes, head up, and confidence. I knew we had achieved success when he counseled another little one, saying, "that´s OK about being scared, I used to feel like you did, but I don´t anymore." Phil directly changed the course of this young mans life, and it was purposeful, because we had worked to deliberately build confidence with the example of what a good man was. Phil - a good man, who found a good woman, Ann, and made lives better. Can´t say anything more than that. He will be missed.
Beth Tinsman
March 8, 2021
Ann, Julie, and Jeff and family, You all are in my thoughts and prayers. Phil was a wonderful man. Myself and the rest of the kids on Oxford were blessed to have him around. He cared for us, made us laugh, and made us better kids. Thank you for sharing this wonderful man with us. God bless!
Craig Collins
March 7, 2021
Ann - We were so sorry to hear of Phil's passing. We will greatly miss him at our Fountains' gatherings. The smile on his face and his telling of stories made him a joy to be around. His obituary was very good, especially telling of his memberships and joys in life. Marilyn, especially, liked his favorite song and knowing that he now sees the trees of green and red roses too.
Marilyn and Grant
March 7, 2021
Showing 1 - 3 of 3 results