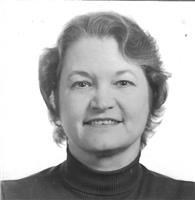 BORN
1924
DIED
2020
Jeanne Jeffers died at age 96 on November 28, 2020 at her home in Newcastle, Washington, with her husband and other family members beside her. She was nurturing, determined, and adventurous. She served her country in World War II. She traveled alone from Chicago to Fairbanks, Alaska in January of 1947 to attend the University of Alaska. She met her future husband there and honeymooned with him for 71 years. She raised four boys, and she welcomed and loved her sons' wives as though they were her own girls. She traveled with her siblings and their spouses through France, Norway, Brazil, and many destinations in North America. She loved to read. After losing her sight to macular degeneration she continued to enjoy books on tape throughout her years. She loved to talk in person and by phone with visitors and family spread around the country. She was a great listener.

Jeanne was born Jean Ardith Lesh on April 30, 1924 in Berwyn, Illinois, the second of four children, to Hertha (Hattie) Caroline Krase and Harold Jesse (Jack) Lesh. She later changed her name to "Jeanne" because she preferred the French spelling. Her family lived in comfortable neighborhoods in Berwyn and Oak Park where she and her sister, Ruth, and two brothers, Jack and Don, grew up and went to high school in the years leading up to World War II.

The family will hold a private celebration of Jeanne's life in the future. A more detailed story of Jeanne's life can be found at: https://obituaries.neptunesociety.com/obituaries/tacoma-wa/jeanne-jeffers-9926782
To plant trees in memory, please visit our Sympathy Store.
Published by Juneau Empire from Jan. 24 to Feb. 23, 2021.
MEMORIAL EVENTS
No memorial events are currently scheduled.
To offer your sympathy during this difficult time, you can now have memorial trees planted in a National Forest in memory of your loved one.
MAKE A DONATION
MEMORIES & CONDOLENCES
Sponsored by JuneauEmpire.com.
1 Entry
Quite the odyssey in life and in more then one locale in Alaska. My condolences; certainly she is missed.
William Venables
February 15, 2021
Showing 1 - 1 of 1 results