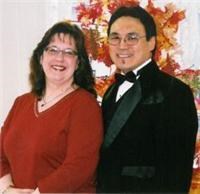 Joseph Murphy passed away on Aug. 14, 2015 in Juneau, AK. He was 49 yrs. old. He was born in Anchorage, AK on Oct. 29, 1965 to Patrick and Suzanne Murphy. After his father passed away in early 1966, Joseph moved with his mother and siblings to Emmonak, AK where he lived until his adult years.

Joseph moved to Kotzebue, AK in his early 20's to help his eldest sister with her children and also to attend the Kotzebue Technical Center. He always had a natural knack for working with his hands and chose building maintenance as his career field. He worked for the Housing Authority in Kotzebue as well as the school district.

Joe had a big year in 1998. As well as the award from the Fire Dept. , Joe also met his soul mate, Tammy Jablonski. The first date they had was the beginning of 17 yrs together. They were known as "Tam and Joe" and "that cute little couple".

While working for the National Park Service in Kotzebue, AK in 2000, Joe was involved in the search and rescue of a lost man on the sea ice in a white out. With ice cracking around them, Joe and a coworker were able to locate the lost man and lead him off the ice to safety by snowmobile. Joe and his coworker were recognized by the U.S. Dept. of the Interior that year for valor. They were flown to Washington, D.C. with their spouses/partners for the award ceremony. The man whose life was saved was also a former Guardsman so Joe was also given an award by the Alaska National Guard for heroism. Joe was very proud of his awards and was so happy to be involved with saving a life.

Joe was a member of the Alaska Army National Guard, and deployed to Iraq in 2005. He spent that year at Camp Victory in Baghdad where he was a machine gunner. That year changed his life dramatically. He was never the same upon his return to Alaska.

Joe worked numerous positions in Juneau, but his favorite employer was Bartlett Regional Hospital where he was a maintenance mechanic. He enjoyed the work, his coworkers and being "needed". He was employed there until just weeks prior to his death.
The last year of Joe's life was a true struggle. He battled depression and PTSD both from his childhood and the war. He also suffered from substance abuse, in an effort to stop the pictures that kept replaying in his mind. He sought help on several occasions over the year, but continued to struggle. Along with the PTSD issues Joe also suffered from a serious cardiac condition which claimed his life.

Joe will be remembered for so many things. He had a smile that could light up a room and never met a stranger. He loved hunting and fishing, playing cards with his mother-in-law, eating Tammy's home cooking, his dog, Christmas lights, driving his Silverado, dancing, good music, snowstorms, the NFL and the NBA, the Denver Broncos, snowmobiling, the U.S. military, cowboy movies, playing pool, TV and anything electronic, his Yupik culture and God.

He is survived by his black lab Buster Joe, Tammy and her family; mother Geneva Jablonski of Juneau, brothers-in-laws Dan Jablonski (Gordon) of Juneau and Ronald Jablonski Jr. (Paula) of Bismarck, ND and nephews Ronald Jablonski III (Chasity) of Grand Rapids, MI and Lou Jablonski (Patti) of Oceanside, CA and their daughter Isabella. Joe is also survived by many friends, but special mentions are Russell Beal and family of Ketchikan, Patrick Octuck of Nome and Dan Levengood and family of Juneau.
Joe is also survived by his mother and stepfather, Suzanne and Willie Joseph, siblings Kathy Tebbits (Lonnie) and family, Franklin Murphy, John Murphy, and George Murphy as well as a large extended family throughout Alaska.

Condolences can be sent to Tammy Jablonski, 8477 Thunder Mtn. Rd. #80, Juneau, AK 99801. No funeral service will be held in Juneau. Joe will be buried in his hometown of Emmonak, AK. In lieu of flowers, Tammy requests that donations be made in Joe's name to either the Alaska Heart Association or the Gastineau Humane Society.
To plant trees in memory, please visit our Sympathy Store.
Published by Juneau Empire from Aug. 18 to Sep. 17, 2015.
MEMORIAL EVENTS
No memorial events are currently scheduled.
To offer your sympathy during this difficult time, you can now have memorial trees planted in a National Forest in memory of your loved one.
MAKE A DONATION
Please consider a donation as requested by the family.
MEMORIES & CONDOLENCES
22 Entries
Tammy, my thoughts go out to you. Although I didn't know Joseph very well, I do remember him after the horrible event of Sep 11 2003. Joseph was one of the national guard men that stood as security in full uniform at our airport in Kotzebue where I worked. He made light of a very scary situation and was always kind and professional. He certainly achieved so much in his short time here and I can see he impacted many in his crossings.
Danielle
December 1, 2015
Joseph Murphy,
You were a happy person for me in our growing up years! We all helped you and pulled for you no matter what! You worked so hard for the person you are! Your life inspires me! Hard to see you leave! you will not be forgotten! Much condolences to your wife and especially your MOM!
Deena Kelly
November 30, 2015
One of the bravest men that I've had the privilege of serving with. Godspeed my brother. Bless your family.
Ed Irizarry
September 7, 2015
May God comfort you and your family in this time of sorrow and give you peace and strength to endure. Psalms 83:18, Rom. 15:33
Carolyn
September 5, 2015
Dearest Tammy,
We love you and our hearts break with yours. We are grateful that you found your "little man" and you shared a special love even for such a short time. We send our loving embrace to you and Genny and all your family.
Carmela and Jon
Carmela DeMartino-Ryden
August 31, 2015
RIP Joe,Your smile lit up BRH
Bob Hull
August 25, 2015
Tammy, you are in my thoughts and prayers and heart. Love you,
Andrea O'Brien
August 25, 2015
Joe, rest in peace, it was a great pleasure knowing and working with you. BRH has lost a friend.
Shirley Hawkins
August 23, 2015
Joe, you will always be in my heart. I will always remember the fun times.
MOM
August 22, 2015
Joe's quest for the perfect cup of coffee is legendary, as is his aversion to cooking! I was privileged to eat Joe's one and only batch of buffalo wings and he rocked it! Most important to me is that he loved my sister Tam, and will no doubt continue to love and look after her. Godspeed and God bless.
Paula Jablonski
August 22, 2015
Tammy my heart goes out to you. Your "little man" may he rest in peace knowing how much he was loved. I will always remember his sweet smile and wonderful personality. Stay strong my friend.
Linda Harris
August 22, 2015
Tammy,
Those of us at Liberty University send our condolences and lift you up in prayer.
Dr. Jen Warren
August 21, 2015
Lost a good fishing partner and wonderful person, til later. Our thoughts and prayers to Tami, Buster and both families.
Scott McPherson
August 20, 2015
I'm very sorry for your loss Tami. You are in my prayers and thoughts. We will all miss his wonderful smile!
Charlene Sykes
August 20, 2015
For Joe, and others who have gone on before us...your memories burn in our hearts.
Deb Bay
August 20, 2015
Very touching tribute for Joe and his life. He will be missed. Praying for everyone as we continue on until we're all reunited in the Lord's sweet embrace.
Deb Bay
August 20, 2015
Joseph, you were a good man.....I loved you the minute I met you. You are missed more than you know. Rest in the arms of the angels....until I see you again. Love You, Tam & Buster
August 19, 2015
The whole family is heartbroken over Joe's passing. Rest in peace Joe.
Gordon Jablonski
August 19, 2015
I will miss seeing his smiling face at BRH. Rest in peace.
August 19, 2015
Joe and Tammy know my heart. I am grief striken beyond imagination. I'm so sorry Tammy. I'm here for you. Just reach out and I will be there as always. Joe, rest in peace my sweet little friend.
Suzanne Dutson
August 19, 2015
I was very saddened to hear of Joeseph's passing, his brother George worked for me in Emmonak and I always visited with Joe when I seen him at his work in Bartlett Regional Hospital, he will be missed and we are praying for the family.
Gary Eddy
August 19, 2015
Rest in Peace....Easaws
August 18, 2015
Showing 1 - 22 of 22 results