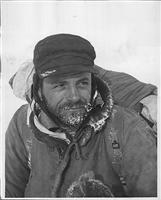 Maynard Malcolm Miller, explorer, committed educator and noted scientist whose glaciological research was among the first to identify hard evidence of global climate change as a result of human industrial activity, died on January 26 at his home in Moscow, Idaho. He was 93.

Dr. Miller was Emeritus Professor at the University of Idaho where he previously served as Dean of the College of Mines and Earth Resources, and Director of the Glaciological and Arctic Sciences Institute. The Institute, along with the Juneau Icefield Research Program, founded in 1946 and developed in partnership with his late wife Joan Walsh Miller, inspired more than 4000 students through hands on involvement in scientific research in remote mountain environments in Alaska and around the world. (www.juneauicefield.com)

As a scientist and climber on America's first Mt. Everest Expedition in 1963, Miller conducted research on atmospheric pollution and other contributors to climate change. On that historic expedition, as the West Ridge climbers returned from the summit, Miller sacrificed his precious scientific water samples, laboriously collected from the Khumbu Icefall, in order to rehydrate the exhausted climbers.

Although a deeply spiritual person, Maynard Miller did not believe in any God of organized religion; instead, he found inspiration in the magnificence and wonder of nature. He also believed that through the challenge of rugged mountain expeditions, where teamwork is essential to achieve a common goal, the best in each individual may be revealed. His great joy was to share and provide these experiences for others.

A native of the Northwest, Miller graduated from Stadium High School in Tacoma, Washington. He studied geology and glaciology, receiving degrees from Harvard University and Columbia University, and his PhD from Cambridge University, England. During WWII Miller served on a Navy destroyer, seeing active duty in 11 major Pacific campaigns and sustaining injuries during an aircraft attack at sea. Late in life, Miller served three terms in the Idaho State House of Representatives where he advocated for expanding educational opportunities.

He will be remembered for his enthusiasm, unrelenting optimism and phrases such as, "stress helps you grow" and his closing on mountain radio transmissions, "mighty fine, mighty fine".

Miller is survived by his sons and their spouses, Ross Miller (Denise), and Lance Miller (Jana). Miller also leaves behind his beloved grandchildren, Logan, Anna, Zachary and Eva, extended family in the Puget Sound area as well as scores of grateful students, scientific collaborators and co-adventurers.

Celebrations of the life of Maynard Malcolm Miller will be announced at a future date.


* attached Photograph of Dr. Miller by Ira Spring
on a Juneau Icefield Expedition in November, 1953.
Published by Juneau Empire on Feb. 11, 2014.
MAKE A DONATION
MEMORIES & CONDOLENCES
15 Entries
Thank you very much for your friendship, your excellent teacher quality. I remember you from the deep of my heart.
Cesar Portocarrero - Peru
November 29, 2018
I was one of the youngest participants on the Icefield (I was 16) in 1964. I wasn't a scientist or a graduate student. I was a "Sherpa", ferrying loads up to Camp 10 and other remote stations. The experience I gained that summer was more valuable than I can ever describe....it changed my life, opened doors and provided memories I shall nEver forget. I will miss Dr. Miller. I'm sure I'll meet him again on a distant mountain peak or a misty glacial valley...someday, somewhere.
Patrick Egan
March 5, 2015
My students have watched the National Geographic video on glaciers for years. With three classes of earth science students every semester, and I first starting showing the video at least 10 years ago, I feel like I knew Dr. Miller. I encourage my students to research the experts we see in our videos, so we have followed his legacy as well. What a wonderful scientist he was.
Sheila Moore
April 14, 2014
Lance,

I'm seven yours gone from Juneau after 31 years there. I'll never forget a chamber lunch where your Dad gave the news to our movers and shakers about anthropogenic global warning. I spoke with him briefly and know that his life's work will have a profound affect on the future of the world, he has the ice cores.
All the best to you and your family, one of these days I will be back for a visit, I spent 31 years in Juneau and I am a lifelong Alaskan.
If you're ever in the Rogue Valley look us up, I love all my Alaskan friends and welcome you all to my home.

Jim Akins
February 18, 2014
I'll never forget the ice field experience in 1987. I saw Dr. Miller about 2 years ago at Juneau's Concerts in the Park. He remembered me, even after having mentored some 4,000 students over the years. He did a lot for so many.
Georgia Horton
February 17, 2014
I can't be sad, he was a great Man and his journey ended well, he left behind great teachings and a wonderful family...RIP my dear friend and thanks.......BCW..La Paz, Bolivia
Barry Wink
February 17, 2014
Dr. Miller was special in so many ways. We met the Millers in the 1970's, and I never saw him when he was not enthusiastic about life - his and everyone else's. Once he and Ross were stranded on the ice-field for a week. They had gone up to prepare for students, but got weathered in. When they got back to Juneau, even though students and professors had been there a week and wife Joan was "sitting" them, Dr. Miller and son arrived full of stories about the wonderful adventure they had. JIRP purchased an abandoned hospital in Atlin BC so students would have a place to stay and review summer's findings before returning to their homes at end of season. Jim and I went over and stayed there a few days one season end. After going to bed one night (our kids were already asleep), Dr. Miller knocked on everyone's door and insisted we go outside immediately. The reward was one of the most beautiful Aurora Borealis I ever saw. It looked like a cathedral over the building. Jim and I were fortunate to have seen Dr. Miller in September in Moscow. Typically, he was upbeat and wanted to get well so he could come back to Juneau. Dr. Miller's passing is a loss to his family, to his friends, and certainly to the scientific community. Ross, Lance and family: Please accept our love and condolences
Dot Wilson
February 14, 2014
It was impossible to have a boring conversation with this man-truly a "mountain man" and a man of curiosity and stamina.
He lived a long, exciting and productive life. I always considered him a Juneau resident who told us much about the land we live in. Hi work will live on of course.
Warren Wiley
February 14, 2014
I am so sorry for the loss of your beloved Maynard. May our creator comfort and strengthen you for the days ahead.
February 14, 2014
From Moscow to Juneau, from deans office to underground mines to Mendenhall Ice our geologic paths crossed.... what a wonderful person to have been around. I've been lucky.
Alec Creighton
February 13, 2014
I am so happy I was able to hear him speak about his work. (His friend Judge Tom Steward invited him to speak for the Juneau World Affairs Council.) He was a great orator and truly loved nature and the outdoors. Truly, an admirable and inspirational person.
Mary Miller
February 13, 2014
May his family have peace in that he lived a very fulfilling life, loving the beauty of creation all around him. But also, please be assured that his life will never be forgotten by the one who counts each one of us individually important...our Creator himself.---
February 12, 2014
BRAVO!!! WHAT A LIFE!!! WHAT A LEGACY!!!
Karen Komatsubara
February 12, 2014
To the Miller family: May you wrap yourself in the memories shared with your loved one.
February 12, 2014
Sorry to learn of Dr. Millers passing. A Great man. May he always be looking down from the Taku River mountain tops, where I met him 49 years ago.
Tom Dawson
February 11, 2014
Showing 1 - 15 of 15 results