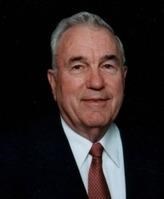 BORN
1931
DIED
2020
Charles DeForest
June 24, 1931 - November 8, 2020
El Dorado, Kansas - Charles "Charlie" K. DeForest, 89, died peacefully on Sunday, November 8, 2020. Charlie was born June 24, 1931, to John and Cleo (Marsh) DeForest in Peabody, Kansas. He married Joyce Krehbiel June 14, 1953. Charlie graduated from Peabody High School in 1949 and Kansas State University in 1954. After he graduated, Charlie served as an officer in the U.S. Air Force, stationed in Germany, where his eldest daughter was born. After Charlie, Joyce and their daughter, Beverly, returned to the family farm in Florence, Kansas, they had two more children – Charles D. "Chuck" and Diane. They moved to Peabody in 1963, Charlie continued his farming operation. He served as a Marion County Commissioner for 19 years. After his retirement, he and Joyce moved to El Dorado, Kansas where they lived out the rest of their days together until her passing on Dec. 3, 2019. Charlie was a successful farmer, stockman and businessman, a devoted husband and a beloved father, grandfather, brother, uncle and friend. He was kind, generous and often thought of others before himself. One of his proudest accomplishments was teaching each of his nine grandchildren to fish. He was always ready to help or loan you the tool you didn't know you needed. Charlie was preceded in death by his parents; three brothers, Douglas (who died in infancy), John "Jack" and Richard; one sister, Sally; and his wife of 66 years. He survived by two sisters, Cleo "Jean" Smith and Linda (Charlie) Long; son, Charles D. (Catherine); daughters Beverly (Greg) Buster and Diane (Brad) Nightengale; nine grandchildren and 11 great-grandchildren. Cremation services have been accorded. A private service will follow. Memorials may be made to the City of Peabody Park Improvement Project, c/o Vintage Bank Kansas – Peabody, P.O. Box 131, Peabody, KS, 66866, or to KPTS Channel 8. Please sign his online guestbook at www.carlsoncolonial.com.

Published by Wichita Eagle on Nov. 11, 2020.
To plant trees in memory, please visit the Sympathy Store.
MEMORIAL EVENTS
To offer your sympathy during this difficult time, you can now have memorial trees planted in a National Forest in memory of your loved one.
MAKE A DONATION
MEMORIES & CONDOLENCES
Sponsored by Wichita Eagle.
2 Entries
Rest Charles, until you hear at dawn,
the low, clear reveille of God.