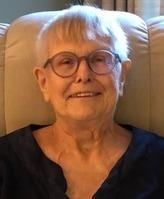 BORN
1943
DIED
2021
FUNERAL HOME
Smith Mortuary - Derby Chapel - Derby
1415 N. Rock Rd.
Derby, KS
Dianne Timmerman
March 29, 1943 - July 16, 2021
Derby, Kansas - Dianne Timmerman, loving wife, mother, and grandmother passed away on July 16th peacefully surrounded by loved ones in her home. She was born March 29th, 1943 in Des Moines, Iowa to Ralph and Helen West. Dianne graduated from Des Moines East High School. After high school, she met her future husband, Daryl Timmerman at a local YWCA dance. They were married on May 26, 1963. They had two sons Brian and Michael, and one daughter Suzanne. While raising their family they had numerous adventures all over the country. They lived in Iowa, Ohio, Washington state, Georgia, and Arizona before settling in Derby, KS in 1984.
Dianne had a love of children. She played an active role in her kid's lives. While young, they would engage in tickle fights which were always a blast. She volunteered in her kid's schools and spent countless hours supporting their sports and activities. Once her kids got older she went to work at Barnes and Noble where she became the go to person for children's books. After the grandkids arrived, she delighted in planning multi-generational adventures for the whole clan. They had numerous family reunions in South Dakota's Black Hills, Yellowstone, southwest Colorado, Washington's Olympic Peninsula, Disney, and Montana. She is survived by her husband Daryl Timmerman, son Brian Timmerman, his wife Leakhana of Eudora, KS, son Michael Timmerman, his wife Diana of Sammamish, WA, daughter Suzanne Edmonson, her husband Mike of Derby, KS, and six grandchildren Carolyn and Alexander Timmerman, Lucas and Olivia Timmerman, and Nathan and Sophia Edmonson. Dianne will always be remembered for her love of children and her love of family. Dianne was preceded in death by her father Ralph West, her mother Helen Saliger, and her stepfather Joe Saliger. The celebration of life will be conducted on Monday, July 26th at 2PM at Smith Mortuary at 1415 North Rock Road in Derby, KS. In lieu of flowers, memorial contributions may be made to: Imagination Library, 111 Dollywood Lane, Pigeon Forge, TN 37836, Phone: 865-428-9606 https://donate.imaginationlibrary.com/