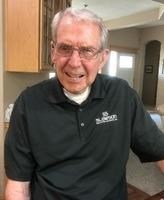 BORN
1936
DIED
2021
FUNERAL HOME
Cochran Mortuary & Crematory - Wichita
1411 N. Broadway
Wichita, KS
Gerald "Jerry" Reeves
September 29, 1936 - October 21, 2021
Wichita, Kansas - Gerald L. "Jerry" Reeves, 85, died October 21, 2021, of cancer. Jerry was a retired electrician and U.S. Army Korean War veteran who grew up on a farm in Cowley County. He attended Ark City High School and worked for electrical contractors in the Wichita area. In his younger days he rode rodeo bulls. Jerry was born September 29, 1936, the son of Chester and Addie Reeves. He was preceded in death by his parents, his sister Doris Bowles and his brother William "Bill" Reeves (Marva). He is survived by his wife, Darlene Herring Reeves; his brother Jim Reeves (Kay); his sister Dona Cochran (John); his daughters, Terri Evans (Raymond) and Traci Welsby (Mike); his son, Todd Reeves (Karol); stepdaughter, Cristy Anderson (Brent); 18 grandchildren and four great-grandchildren (with four on the way). Jerry was a kind, patient and gracious person who was always willing to help others. Over the years he was active in his church, Pleasant Valley United Methodist, and the Kansas Firefighters Museum. Donations in his memory can be made to those two organizations in lieu of flowers. The memorial service is at 1 p.m., Wednesday,October 27, at Pleasant Valley United Methodist Church in Wichita.

Published by Wichita Eagle on Oct. 24, 2021.
To plant trees in memory, please visit the Sympathy Store.
MEMORIAL EVENTS
Oct
27
Memorial service
1:00p.m.
Pleasant Valley United Methodist Church
Wichita, KS
Funeral services provided by:
Cochran Mortuary & Crematory - Wichita
MAKE A DONATION
MEMORIES & CONDOLENCES
Sponsored by Wichita Eagle.
10 Entries
"Before he [Jerry] got too bad he was joking with everyone in the hospital and he always kept his spirits up...It is sad to see him gone but I know he has gone to a better place...you can be happy if you have a mind to and I know you are hurting right now but remember that my grandpa is finally free."
Tori Welsby
Grandchild
October 30, 2021
My grandpa is my favorite cowboy. He was a tough man yet tender hearted. He was strong, a fighter and dedicated, but also knew how to let loose and crack jokes. He instilled a strong will in each one of us and I am happy to know he looks down on us proud and with a smile on his face.
Jenna Welsby
Grandchild
October 30, 2021
My Dad - Wow! What a man. So loving and kind, a fighter too. He loved life and he wanted to live it. He was great example of how we are supposed to live life and treat people. He was proud of our triumphs and when things didn't go the way we planned he was patient and helpful. He always had our backs. I will remember the things he taught us and how much he loved us. A great man is one who leaves others at a loss after he is gone. That is my dad!
Traci Welsby
Daughter
October 30, 2021
Grandpa would do anything for his wife. Better do you 50 push ups every morning to live as long as him.Most fit grandpa in the 316. Grand daughter Lizzie
Lizzie Welsby
Grandchild
October 30, 2021
Praying for your family. Jerry will be missed.
Ted and Sue Saad
October 26, 2021
We are glad to have known Jerry while living in Wichita. He was a loving, giving, honest man who was always open to a good laugh. Our deepest sympathy to Dar and their family.
Sue and Ron Jones
Friend
October 26, 2021
Jerry was a wonderful neighbor and friend and always available to help anyone, Condolences to his family and Darlene, Heaven gained a willing and kind man.
Nancy Ford
Neighbor
October 25, 2021
Sympathy to the Todd and Karol Reeves family and Reeves families in the loss of your dear father. May you all be at peace in his passing. Mike and Betty Haug, Seneca
Mike and Betty Haug
Friend
October 24, 2021
Rest Gerald, until you hear at dawn, the low, clear reveille of God. Thank you for your service to this nation. U.S. Army, Korean War.
Harry Simpson
Other
October 24, 2021
I am glad I had the opportunity to know Jerry and his family.
Phil/Nancy Chenoweth
Friend
October 24, 2021
Showing 1 - 10 of 10 results