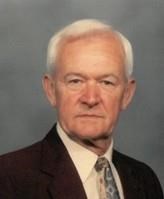 BORN
1932
DIED
2021
FUNERAL HOME
Downing & Lahey Mortuaries & Crematory - East Wichita
6555 EAST CENTRAL
Wichita, KS
Lester "Les" Grimes
December 10, 1932 - May 30, 2021
Andover, Kansas - Lester Grimes, Jr., peacefully went to be with his Creator and Lord on Sunday, May 30, 2021.
He was born in Thomasville, NC on December 10, 1932, to Lester and Mary Lowe Grimes, both of whom preceded him in death. Les attended Beulah High School where he was on the championship basketball team and graduated in 1951. He then joined the US Air Force and was stationed in Korea during the Korean War. Upon leaving the service, he attended Appalachian State University on a baseball scholarship. He graduated with a degree in business and later went on to complete his master's degree. Les continued to play ball until he was 79 years old. He lived with his family in Winston-Salem, NC until moving to Wichita, KS in 2015.
Surviving Les are his wife, Nancy; daughter, Toni (Don) Roberts; son, Joe (Lynda) Grimes; grandchildren, Chase (Caroline) Livengood, Allen (Kara) Grimes, Taylor (Derek) Dixon. He was blessed with 4 great-grandchildren, Brady, Kinley, Maya, and Macy. Memorial Service will be at 11:00 am, Thursday, June 10, 2021, at Metro East Baptist Church. To celebrate his life the family requests donations be directed to Metro East Baptist Church – Prayer Warriors Fund, 333 N. 143rd St. E., Wichita, KS 67230. The family wishes to thank Dr. Seth Page and the Wichita VA Oncology teams, as well as Phoenix Hospice teams for their support during Les' MDS blood cancer journey.
Services in care of Downing & Lahey Mortuary - East Chapel. Share tributes online at: www.dlwichita.com

Published by Wichita Eagle on Jun. 6, 2021.
To plant trees in memory, please visit the Sympathy Store.
MEMORIAL EVENTS
Jun
10
Memorial service
11:00a.m.
Metro East Baptist Church
KS
Funeral services provided by:
Downing & Lahey Mortuaries & Crematory - East Wichita
MAKE A DONATION
MEMORIES & CONDOLENCES
Sponsored by Wichita Eagle.
5 Entries
We are so sorry to the Grimes family, especially to Nan. We love you and are so sorry for your loss. Les was always with a smile and a kind gentle man who loved his Lord. We are praying for you. Our hope is in Jesus, that we will see our loved ones again one day. Larry and Esther Novotny
Esther Novotny
Friend
June 9, 2021
I only knew Les for a short period of time (after he moved to Wichita). He was an awesome person and will be missed by all that knew him. He fought the fight and won the battle. He is now in heaven with our Creator and Lord. May God comfort you during this difficult time.
Scott McMurtrie
Friend
June 9, 2021
Our heart and prayers go out to you, Nan, and your family! We have loved y´all for as long as I can remember and have missed you being near! What a beautiful legacy of love and service to Jesus your precious husband leaves us all. Ken and Cindy Mills
Cindy Mills
Friend
June 7, 2021
Rest Lester, until you hear at dawn,
the low, clear reveille of God.

Thank you for your service to this nation. U.S. Air Force, Korean War.
Harry Simpson
June 6, 2021
So sorry to hear about the death of Lester. He was such a fun & civic minded when he and Nancy lived in Winston-Salem, NC.
Alice W. Greene
June 6, 2021
Showing 1 - 5 of 5 results