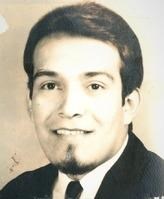 BORN
1941
DIED
2021
ABOUT
Hutchinson High School
FUNERAL HOME
Elliott Mortuary & Crematory - Hutchinson
1219 N. Main
Hutchinson, KS
Rick Ojeda
December 10, 1941 - January 30, 2021
Hutchinson, Kansas - Richard "Rick" Ojeda, 79, of Hutchinson, died, January 30, 2021, at Hutchinson Regional Medical Center. He was born December 10, 1941, in Hutchinson, to John and Elizabeth (Caudillo) Ojeda.
Rick graduated from Hutchinson High School and Sidney's Hair Dressing College, but he often joked that he went to Yale, "in the front and out the back". He was a cosmetologist and owner of Rick's Hair Fashion. Rick studied, taught, and was awarded across the United States and Europe for his cosmetology. He was also very active in his community. Rick participated in Kansas For Life, Hispanics For Life, Wichita Police Advisory Committee, Racial Profiling Advisory Board, and the NAACP and several others. He was a member of St. Teresa Catholic Church, Hutchinson and also supported Our Lady of Guadalupe Catholic Church, Church of the Holy Cross, and St. Francis of Assisi Catholic Church for many years.
Rick is survived by: daughter, Dominique Ojeda, Clear Lake Shore, Texas; granddaughters, Chelsea Ojeda-Jones (Andrew), Seabrook, Texas, Meagan Smith, Wichita; brother, Tony Ojeda, Hutchinson; sister, Rosemary Ojeda, Hutchinson; three great-grandchildren; three nephews; and three nieces.
He was preceded in death by: his parents; brothers, Johnny and George Ojeda; and sister, Juanita Ojeda.
Private funeral service will be Thursday, February 4, 2021, at St. Teresa Catholic Church, with Father Mike Maybrier officiating. For the health and safety of friends and family, everyone can view Rick's service online at 10am, visit the St. Teresa YouTube channel day of the service. Military Honors will be conducted by the Kansas Army National Guard Honor Guard. Burial will follow in Fairlawn Burial Park. Friends may sign the book from 9 a.m. to 5 p.m. Wednesday at Elliott Mortuary.
Memorials are suggested to Kansas For Life, in care of Elliott Mortuary, 1219 N. Main, Hutchinson, KS 67501.

Published by Wichita Eagle on Feb. 3, 2021.
To plant trees in memory, please visit the Sympathy Store.
MEMORIAL EVENTS
Feb
3
Calling hours
9:00a.m. - 5:00p.m.
Friends may sign the book at Elliott Mortuary
1219 N. Main, Hutchinson, KS
Feb
4
Funeral service
10:00a.m.
view service online at St. Teresa YouTube channel
KS
Funeral services provided by:
Elliott Mortuary & Crematory - Hutchinson
MAKE A DONATION
MEMORIES & CONDOLENCES
Sponsored by Wichita Eagle.
5 Entries
Rick, I'm deeply saddened you are gone. I wish things were different. Thank you for serving your community, your country, and for being a light amidst the heavens. May those who grieve find comfort in each other and the memories they carry of you. Until then,
Athena
Family
February 4, 2021
Richard, thank you for being so kind and loving the times we spoke. Rest now in God's peace. My condolences to all the family and my love and prayers. ♥
Grace
Family
February 4, 2021
Rest Richard, until you hear at dawn,
the low, clear reveille of God.

Thank you for your service to this nation. U.S. Army.
Harry Simpson
February 3, 2021
Rick was a very nice, easy going guy. He was more than just a friend, we thought of him as family here at the credit union and likewise. He will definitely be missed! Although he's gone, he is in a much better place. I'll see you again one day, Rick.
Phil Bogner
February 3, 2021
I am gonna miss you buddy. Thanks for all the laughter you brought us. Prayers to your family.
Gary Hull
Friend
February 3, 2021
Showing 1 - 5 of 5 results