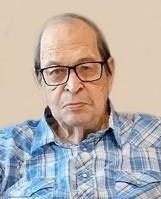 BORN
1934
DIED
2021
FUNERAL HOME
Resthaven Mortuary & Gardens of Memory - Wichita
11800 West Highway 54
Wichita, KS
Ronald Joe Wilkinson
April 9, 1934 - November 24, 2021
Wichita, Kansas - Ronald Joe Wilkinson peacefully passed away at the age of 87 on Nov. 24, 2021 in Wichita, KS. Ron was born at Wesley Hospital in Wichita on April 9, 1934 to Virgil and Edythe (Wiske) Wilkinson, the youngest of 3 sons. He was preceded in death by his wife of 52 years, Sidney (Beattie); son, Stuart; parents, both brothers, Milton and Roger, and sister-in-law, Gwendolyn (Galloup). He is survived by his daughter Shelley (aka Tootie) and numerous nieces, nephews, a granddog and several grandcats. Growing up in the old Riverside neighborhood of Wichita, Ron (RJ, Ronnie Joe, RJDS, Waxy) was involved in Boy Scouts, obtaining the rank of Eagle Scout. He attended Riverside Elem, Marshall Middle and North High Schools. After graduating from North High in 1952, he attended Wichita Univ, graduating with a Bachelor of Arts in English in 1956. While still attending North High, Ron got a job at KANS radio as a board operator where he continued working while at Wichita Univ. He went on to KWBB radio briefly before ending up at KFH where he became an on-air personality. He was a member of Alpha Gamma Gamma social fraternity at Wichita Univ. He then moved to Washington, DC to attend George Washington Univ Law School. While there, he worked for the U.S. Congress. In order to be closer to his mother after she had a stroke, he moved to Topeka where he attended and graduated from Washburn Law School. He was admitted to the Bar in 1958. He was a member of Delta Theta Phi legal fraternity. He then joined the Air Force Reserve, where he achieved the rank of Captain. It was in Topeka in 1958 that Ron met and married Sidney Beattie. After being admitted to the Bar, he joined his father at the Wilkinson & Wilkinson Law Office. He was appointed pro tem judge in the Court of Common Pleas before running for and being elected Police Court judge of Wichita. He taught for the Legal Asst Program at Wichita State Univ for several years. He became a Life Member of the Wichita Bar Assn in 2004. He achieved the Martindale-Hubbell peer rating of AV Preeminent, the highest available. He practiced law in Wichita for well over 50 years. Among Ron's numerous professional, political and volunteer positions and appointments: President, Washburn Univ Law School Bar Assn.; President, Wichita-Sedgwick County Assn for Mental Health; Director, Kansas Assn for Mental Health; President, Kansas Young Republicans; Chairman, Sedgwick County Rep. Central Comm; Selected to attend the Defense Strategy Seminar at the National War College in 1960. Ron became an avid gardener. He especially enjoyed starting vegetable plants from seeds and sharing the seedlings with neighbors, friends and relatives. He had a great love of books and history, especially the Civil War and often joked (?) that he was Abraham Lincoln in a previous life. He always had a good (?) joke to tell and could talk to and make friends with anyone. Ron and Sidney adopted Stuart in 1963 and Shelley in 1965. He took excellent care of Sidney after her Alzheimer's diagnosis until (and after) she had to move to a home plus care facility a few months before her death in 2010. He was always concerned with other people's happiness and well-being and was happy to answer legal questions and offer advice to anyone who asked. He was a great friend, uncle and father and will be greatly missed by many. In lieu of flowers, donations can be made to Friends of Felines KS, 8918 W 21st N, Suite 200 #160, Wichita, KS 67205-1880. Private family burial will take place at Resthaven's Cemetery in the Garden of Prayer. A Celebration of Life Service will be held at a later date.

Published by Wichita Eagle on Nov. 28, 2021.
To plant trees in memory, please visit the Sympathy Store.
MEMORIAL EVENTS
To offer your sympathy during this difficult time, you can now have memorial trees planted in a National Forest in memory of your loved one.
Funeral services provided by:
Resthaven Mortuary & Gardens of Memory - Wichita
MAKE A DONATION
MEMORIES & CONDOLENCES
Sponsored by Wichita Eagle.
4 Entries
In the memory of one of the greatest Uncles a niece could ever have! A brilliant mind! A kind a gentle giant! He will be missed!
Sheryl K Lewis
Family
November 30, 2021
I will never forget a few days before my mom died, Ron, popped in and said "hey there Skeeter!" My mom lit up! She loved her cousins so much, because she was an only child. I last saw Ron at his brother Milt's funeral. It was good to see him. So many fond memories of him and his siblings and his parents. His memory will be a blessing
Rev. Cindy Watson
Family
November 29, 2021
Rest Ronald, until you hear at dawn, the low, clear reveille of God. Thank you for your service to this nation. U.S. Air Force Reserve, Captain.
Harry Simpson
Other
November 28, 2021
I am so sorry to hear of Ronnie's passing. Just like his father Virgil he was such a kind and happy person. He was such a great help when he handled my parents estate and his assistance went far beyond his capacity as a legal advisor. I am sure he will be missed by many.
Kelly Rabourn
November 28, 2021
Showing 1 - 4 of 4 results