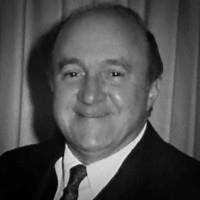 BORN
1926
DIED
2021
Albin Polonyi
July 20, 1926 - August 31, 2021
Marana, Arizona - Albin S. Polonyi, born July 20, 1926, in Chicago, Illinois, passed away on Tuesday, August 31, 2021. He was the son of Thomas Stephen Polonyi and Genofeva ( Luprich) Polonyi, immigrants from Hungary.
A World War II veteran, Al left high school after his junior year to enlist in the U.S. Navy shortly before his seventeenth birthday. He served as a submariner in the Pacific, aboard the U.S.S. Croaker and the U.S.S. Sea Poacher. Unwavering in his patriotism, Al was anchored by his love for his country.
After the war, Al earned a bachelor's degree in accounting from the University of Illinois, Champagne/Urbana. He later completed his MBA from Rockhurst College in Kansas City, Missouri. Throughout his career he served in various capacities with the Pillsbury Company, Louis Dreyfus Company and the Peavey Company. He became a director at the National Grain Trade Council, served as president of the Kansas City Clearing Corporation and as Chairman of the Kansas City Board of Trade, where he was a pit broker. He later formed his own company, the A.S. Polonyi Company, Inc. Al served as that firm's CEO until his retirement from the Board of Trade.
Affectionately known as "Big Al," for his big heart and his warm smile, Al was a friend and mentor to many. He had an eager mind, always learning and ready for adventure. Many of those adventures he shared with his children. A Chiefs fan from the days before Arrowhead, he was also an avid golfer and an early member of the Wolf Creek Golf Club. The cabin he shared with his wife Frances, on Star Island, in Cass Lake, Minnesota, was his special place. After his retirement, he was able to spend every summer there and through the years, many wonderful memories were shared with his family and friends. He will be greatly missed by them all.
He was preceded in death by his parents, his sister, Mary (Polonyi) Schurzmann, his former wife, Wilma (Smits) Polonyi and his daughter Barbara (Polonyi) Tenuta. He is survived by his wife, Frances (Ide) Polonyi, his daughters, Cathy Polonyi King (Randy), Janet Polonyi Hall (Jim), his son, Albin Stephen Polonyi, seven grandchildren and sixteen great grandchildren.
A funeral mass will be held at Visitation Parish, 5141 Main, Kansas City, Missouri, on Wednesday, October 13, 2021 at 11:00 A.M. The family suggests that donations may be made to either the American Red Cross or the Honor Flight Network, www.honorflight.org, or to the charity of your choice.
Interment will be private, in Creston, Iowa.

Published by Kansas City Star on Sep. 19, 2021.
To plant trees in memory, please visit the Sympathy Store.
MEMORIAL EVENTS
Oct
13
Funeral Mass
11:00a.m.
Visitation Parish
5141 Main, Kansas City, MO
MAKE A DONATION
Please consider a donation as requested by the family.
MEMORIES & CONDOLENCES
Sponsored by Kansas City Star.
2 Entries
Dear Frances and family and friends of Albin´s, on behalf of the United States Submarine Veterans, we offer our sincere condolences at Albin´s passing. Please know that you are in our thoughts and prayers. We are always saddened whenever a fellow "Bubblehead" leaves on Eternal Patrol. We are grateful for Albin´s distinguished service to our country in the U.S. Submarine Service during WWII. He served with honor aboard the USS Bashaw SS/SSK/AGSS-241, USS Nautilus SS-168, USS Croaker SS/SSK/AGSS-246, USS Boarfish SS-327 War Patrols 4 &5, USS Brill SS-330, USS Sea Owl SS-405, USS Sea Poacher SS-406. Albin qualified in Submarines on the USS Sea Poacher SS-406 in 1945. He was a member of the United States Submarine Veterans WWII. To our "Brother-of-the-Phin" we say, "Sailor, rest your oar. We have the watch. Fair Winds and Following Seas." Thank you for your service to our country. Frances, ... may the Lord of peace himself give you peace at all times in every way. The Lord be with you. 2 Thessalonians 3:16 Albin Stephen POLONYI, EMFN(SS) US Navy, now on Eternal Patrol. Rev. Ray Fritz (EM1-SS), National Chaplain USSVI.
Chaplain Ray Fritz
Other
October 16, 2021
Frances, We USS Sea Poacher shipmates of Al are sorry to hear of his passing. I just sent you his memorial plaque to PO BOX 3249 Placida ,FL as that was the address i had for you and Albin. Please send me your present address as the USPS might send the plaque back to me. Bill Brinkman [email protected]
William Brinkman
Other
September 20, 2021
Showing 1 - 2 of 2 results