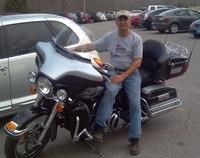 BORN
1955
DIED
2021
Alireza "Masoud" Aramjoo
September 30, 1961 - September 6, 2021
Kansas City, Missouri - Alireza "Masoud" Aramjoo passed away in Orange County, California on September 6th, 2021. Ali retired from the Kansas City, Missouri Police Department in December 2020 - after 21 years of service as the Communications Department Supervisor.
Ali excitedly planned a retirement adventure on his 2010 Harley Davidson Ultra Classic from Kansas City, Missouri to California. Never alone, his son, Paemon, laid by his side holding his hand during his last moments.
In his own words, days before passing, Ali described his best life decision as his marriage and commitment to his wife, Roxanna Aramjoo. He never wavered in his vow to her until death did them part after 38 years together.
In addition to Ali's unwavering dedication to his wife, he was a most dedicated father to his two children, daughter Azita Joy Aramjoo, son Paemon Lee Honest Aramjoo and his daughter-in-law Ashley Jade Aramjoo (Paemon's spouse). Ali cherished spending time with his three grandchildren, Aaliyah Alize Aramjoo-Hull, Griffin Lee Honest Aramjoo and Daisy Jade Aramjoo.
He is also survived by two brothers, Mohammad Aramjoo (Marsia) and Mansoor Aramjoo (Mitra), two sisters Lala (Masoot) and Ladan (Fariboors), in addition to all his nieces and nephews. Family and friends are the core of Ali's legacy.
He was preceded in death by his father, Marshla Aramjoo, and mother, Zinat Ziari.
Ali will be remembered as a family man with a heart of gold. He is often described to have possessed a kindness difficult to fully capture with words alone. Ali was readily available to listen and in his offerings of kindness to those he encountered during his full and admirable life. While many will say he is being laid to rest, Ali will continue to be active in the minds of his loved ones.
A private burial will be held with his family. A Celebration of Life will be held at Heritage Hall, 117 W. Kansas Street, Liberty, Missouri 64068 from 3:00 PM to 7:00 PM on Saturday, September 18, 2021.
Ali would have wanted to be remembered for helping and being present for others. The family asks that in lieu of flowers that donations be made to Global FC by calling 816.456.1528 or visiting https://www.globalfutbol.org/contact/donate/

Published by Kansas City Star on Sep. 14, 2021.
To plant trees in memory, please visit the Sympathy Store.
MEMORIAL EVENTS
Sep
18
Celebration of Life
3:00p.m. - 7:00p.m.
Heritage Hall
117 W. Kansas Street, Liberty, MO
MAKE A DONATION
MEMORIES & CONDOLENCES
Sponsored by Kansas City Star.
1 Entry
You have my sympathy. Ali is the nicest person. I was shocked at the news. I really enjoyed working with him.
Kevin Whittaker
September 14, 2021
Showing 1 - 1 of 1 results