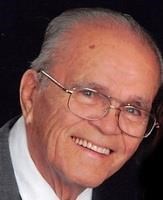 BORN
1928
DIED
February 23, 2021
Aron Richard Smitka
February 8, 1928 - February 23, 2021
Blue Springs, Missouri - Aron Smitka, 93, of Blue Springs, Missouri, passed away Tuesday, February 23, 2021, at home surrounded by his family. Visitation will be held from 10:00 a.m. to 11:00 a.m. Saturday, February 27, 2021, at St. Mark's Catholic Church, Independence, Missouri. Aron was a lifelong Catholic. A funeral Mass will be held at 11:00 a.m. directly following the visitation. Burial will take place at Woodlawn Cemetery in Independence following Mass. Aron was the fourth child of Juraj (George) Smitka and Zuzana (Susan) Tetak Firic who immigrated to the United States in the early 20th century. Aron grew up in Sugar Creek, Missouri and spoke the Slovak language at home during his formative years. He retained his fluency throughout his life. He maintained contact with his Slovak relatives and their descendants. Upon turning sixteen, he joined the Merchant Marines and spent a year on the Liberty Ship Edward J O'Brien in the Pacific Theater. Discharged after the war, he was then drafted by the US Army when he turned eighteen and was part of the occupation forces in Japan. On his return, he met and married his wife, Rose D. James, on June 23, 1951. After working at Sheffield Steel and Standard Oil in Sugar Creek, Aron joined the Asbestos Workers Union. He worked as a union insulator for 35 years mostly running jobs for Owens Corning Fiberglas. In his younger years, Aron excelled as an athlete and was unbeatable in games like badminton. Aron was also an avid bowler well into retirement. His quick wit and one-liners kept his family entertained. He affectionately bestowed nicknames on all his children. Aron was ever present when good advice was needed. Aron is preceded in death by his parents and siblings, Arthur, George, Bill, Donnie, Thelma, Alice, and Mary Rose. Survivors include his wife of nearly seventy years, Rose, his six children Terry Smitka (Pamela), Sharon Short (David), Becky Anthony (Mark), Mike Smitka (Amy), Linda Babcock (David), and Steve Smitka (Sarah) as well as 13 grandchildren and 11 great grandchildren. The Smitka family believes they don't make them like Aron anymore. Aron was truly a member of the Greatest Generation. He was a great family leader, a loving husband, and an inspiration and role model for his children and grandchildren. He will be missed by all. In lieu of flowers, donations may be made in Aron's memory to St. Michael the Archangel Catholic School, 2901 Lee's Summit Road, Lee's Summit, Missouri 64064. Online condolences may be expressed to the family at www.speakschapel.com (Arrangements: Speaks Suburban Chapel (816) 373-3600)