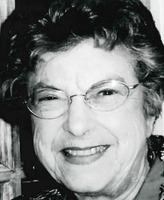 BORN
1927
DIED
2021
FUNERAL HOME
Johnson County Funeral Chapel & Memorial Gardens
11200 Metcalf Avenue
Overland Park, KS
Billie Marie Tobias Warden
August 10, 2021
Lenexa, Kansas - Billie Marie Tobias Warden, 94, passed away early Tuesday morning, August 10, 2021, into the loving arms of our Heavenly Father. Billie was born July 2, 1927 to Rollie Orville "Toby" and Flossie Mae Montandon Tobias. Billie grew up in Liberal, Kansas, graduating from high school in 1945. She attended K-state for 2 years and was a member of Delta Delta Delta Sorority. She married Dale M. "Pidge" Warden on August 14, 1949, and they lived in Liberal until 1981 when they moved to Colorado where they retired. Billie worked at the Jo-Le shop in Liberal where she managed the children's department for over 20 years, was a member of Eastern Star and a lifelong member of the American Legion Auxiliary. Billie was the winner of the first (1950) International Pancake Day race held each year on Fat Tuesday between Liberal and Olney, England. She loved being the first winner but always regretted walking part of the race because she was so far ahead, enabling the Olney winner to have a better time!
In 1990, Billie and Pidge moved to the KC area living at Lakeview Village Retirement since 2007.
Billie was a member of Overland Park Christian Church, Overland Park Lioness Club, Quivira Crossing Daughters of the American Revolution and PEO International Chapter GI. She was preceded in death by her husband, parents and brother. She is survived by daughters Sheila (Don) Cohenour and Alicia (Greg) Bird, grandchildren Jocelyn, Jessica and Justin Cohenour, Telzey (Darin) Jantzen, Andrew Bird (Jennifer) and great grandchildren Daylin and Rylan Jantzen and Abigail and Caleb Bird. Visitation will be 9:00-11:00 Thursday, September 9, at Overland Park Christian Church, 75th and Conser, with funeral services to follow. Memorials may be made to Overland Park Christian Church and Lakeview Village Foundation Good Samaritan Fund.

Published by Kansas City Star on Aug. 29, 2021.
To plant trees in memory, please visit the Sympathy Store.
MEMORIAL EVENTS
Sep
9
Visitation
9:30a.m. - 11:00a.m.
Overland Park Christian Church
75th and Conser, KS
Sep
9
Funeral service
11:00a.m.
Overland Park Christian Church
75th and Conser, KS
Funeral services provided by:
Johnson County Funeral Chapel & Memorial Gardens
MAKE A DONATION
MEMORIES & CONDOLENCES
Sponsored by Kansas City Star.
3 Entries
Billie was a very special friend from the first moment I met her. Her twinkling eyes and huge heart held enough love to warm up the entire room! Everyone loved her. And now she is in her Real Home, with a beautiful crown of jewels.
Jackie Pellow
Friend
October 12, 2021
Dear Billie, My sister and pioneer in the Daughters of the American Revolution, it was my great honor to have known you here on earth. I will never forget your bright, joyful, and enthusiastic presence at our meetings. Our Comfort is knowing that our Lord and Savior Jesus, holds you and your soul forever now in His Heavenly Kingdom, in a place of no sighing, pain or suffering. May God grant all of your family members His everlasting Peace and Comfort as they let you go to Him. May your Memory Be Eternal! See you later, sister. With love in Christ, Stacey H. Suarez (Anastacia)
Stacey H. Suarez
Friend
August 31, 2021
Dear Sheila, Don, Jocelyn, Jessica, and Justin, I was so very sorry to read about Billie's passing in this past Sunday's Kansas City Star. I pray that God will wrap His arms around you and your extended family in the days, weeks, and months to come. I am going to do everything I can to make it to the memorial service. Love to all of you.
Judy Southard
Friend
August 30, 2021
Showing 1 - 3 of 3 results