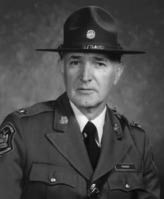 BORN
1934
DIED
2021
FUNERAL HOME
Sweeney-Phillips & Holdren Funeral Home
617 N. Maguire St.
Warrensburg, MO
Clarence E. "Mel" Fisher
May 4, 2021
Warrensburg, Missouri - Clarence E. "Mel" Fisher, age 86, of Warrensburg passed away Tuesday, May 4, 2021 at the Missouri Veteran Home in Warrensburg.
He was born August 19, 1934 in Englewood, CA the son of Clarence and Alvina (Dryer) Fisher.
On May 8, 1971, he and Carol "Jeanne" Henderson were united in marriage in Kansas City, MO.
Mel graduated from Lexington High School in 1952 and Wentworth Military Academy in 1954 before serving in the U.S. Army from 1954-56. He graduated from the University of Missouri - Columbia in 1958 with a degree in journalism. He earned his Master of Business Administration majoring in public administration in 1970 at the University of Missouri - Kansas City. He graduated from the FBI National Academy in 1973 and the FBI Executive Institute in 1989.
Mel joined the Missouri State Highway Patrol on August 3, 1958 as part of the 18th recruit class. He was appointed Colonel on April 26, 1989. After 35 years of service, he retired on August 31, 1993.
He went on to serve as Assistant Director of Enforcement and then Executive Director of the Missouri Gaming Commission until his retirement in 2000.
Mel was a Paul Harris Fellow and a 40+ year member of Rotary International and a lifetime member of the Missouri Association of State Troopers Emergency Relief Society (MASTERS).
Mel was extremely proud of his family and his decades of service to the State of Missouri. He valued the friendships he built along the way and never forgot a name or face.
Mel is survived by his wife Carol "Jeanne" Fisher of Warrensburg; his children Valerie (Chad) Nichols of Parkville, MO, Carrie McMillin of Jefferson City, MO, and Kevin (Stephanie) Fisher of Warrensburg; grandchildren Lucas Nichols, Brooke Nichols, Cooper E. Fisher, Trevor Elkins, Ben Elkins, Kyle (Taylor) Elkins; a great grandson Beckham Elkins; and a brother-in-law Leon Henderson.
He was preceded in death by his parents Clarence and Alvina Fisher and his in-laws Dr. Elton and Hettie Cassity.
A private family burial will take place in Missouri State Veteran Cemetery in Higginsville with full military honors.
Memorial contributions are suggested to MASTERS for the families of state troopers killed in the line of duty. Contributions can be left in care of Sweeney-Phillips & Holdren Funeral Home.

To plant trees in memory, please visit our Sympathy Store.
Published by Kansas City Star on May 6, 2021.
MEMORIAL EVENTS
No memorial events are currently scheduled.
To offer your sympathy during this difficult time, you can now have memorial trees planted in a National Forest in memory of your loved one.
Funeral services provided by:
Sweeney-Phillips & Holdren Funeral Home
MEMORIES & CONDOLENCES
Sponsored by Kansas City Star.
3 Entries
I was so sorry to hear about Clarence who I was around as a little girl. "Sonny" was called that by his Dad my Uncle Clarence who was my great Uncle. I was 10 yrs his junior and remember seeing him so much when I was at my Grandparents house across the street from Aunt Margarets house in Lexington. He took me a lot of places and I´m sure he considered me a pest but I adored him and though I never saw him after the age of 18 I never forgot him. He either came to my Mothers funeral in Lexington, Mo. or called me which was 1981. I thought of him often and was so proud of all his accomplishments during his career. I know he will be missed by all who knew him but most of all his family. I send my condolences to his wife , children , and grandchildren, because his love and kindness will be so missed. Love to all, Patricia Frick Felsten
Patricia Felsten
May 8, 2021
A good guy and a great leader. He led by example. RIP colonel.
Vince and Ann Ellis
Coworker
May 6, 2021
Dear Jeanne and family, Have so many fun memories of Mel when we were growing up in the Rider Clan and school years in Lexington. My Aunt was married to his Uncle. He was a good and loving person even as a child. My sympathy is with all of you and Mel made our world a better place.
Jan Rider McCoy
May 5, 2021
Showing 1 - 3 of 3 results