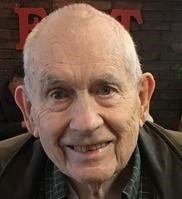 BORN
1927
DIED
2021
FUNERAL HOME
Mt. Moriah, Newcomer and Freeman Funeral Home | Mount Moriah Cemetery Sout
10507 Holmes Road
Kansas City, MO
Curtis "Curt" Carter Williams
June 11, 1927 - August 21, 2021
Prairie Village, Kansas - Curtis Carter Williams, 94, of Prairie Village, Kansas passed away on August 21, 2021 at SeniorCare Homes in Overland Park, Kansas.
Curt was preceded in death by his parents, Carter L. Williams, and Moyne S. Williams. He is survived by his son Scott C. Williams, and his daughter Lisa Drake, and his granddaughter Libby Herwig and step-grandson, Connor Drake.
He was born June 11, 1927 in Kansas City, Kansas. He was a member of Phi Kappa Psi Fraternity, and became President of the chapter in 1950 for one semester and graduated from the University of Missouri in Economics. His involvement with his fraternity continued through the chapter's housing corporation and was a former President of the local KC Alumni Assn, and later recognized with the KCAA's Phi Psi Man of the Year Award.
He was married to Janet Libby for 62 years. Newly married and living on the Country Club Plaza, he worked at Altman Singleton Insurance Company, which later became Sedgwick, as a Vice President. He was a former President of the Independent Insurance Agents of KC and former Vice President of the Missouri Independent Insurance Association.
Curt played tennis for years at Homestead Country Club and was also a member of Indian Hills Country Club, Rockhill Tennis Club and the University Club. He and his wife Jan were former presidents of the Midnighter' Dance Club.
He was a member of The Village Church, Hillcrest Covenant Church in Prairie Village, Kansas, Covenant Chapel in Leawood, Kansas and then Journey Bible Church. Family was very important to him and he loved being together.
Visitation will be held on September 1st at 12:00pm, with a Celebration of Life Service at 1:00pm at Mt. Moriah, Newcomer & Freeman Funeral Home, 10507 Holmes Road, Kansas City, Missouri. Dinner Reception following the service.
Donations may be made to his favorite place the YMCA of the Rockies: ymcarockies.org/Give