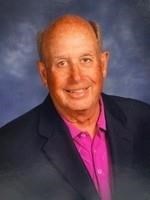 BORN
1941
DIED
2021
David S. Fast
October 19, 1941 - February 22, 2021
Leawood, Kansas - David Spencer Fast passed away peacefully on February 22nd, surrounded by loved ones. Born on October 19, 1941 in Atchison, Kansas, David was the son of William Spencer and Jane Poindexter Fast. He spent his early years in Atchison before graduating from Shattuck School (1959), Pomona College (1963) and Wharton Graduate School (1967). He proudly served in the U.S. Army Medical Service Corps from 1963-1965 and was stationed in Germany where he was commander of a field ambulance company.
He found love for the first time with Patricia Jane Harper, whom he married on January 2, 1967. Upon his graduation from Wharton, the new couple moved to Winston-Salem, NC where he began his career as a municipal bond trader with Wachovia Bank & Trust. Their two children, Spencer Alan and Erin McHugh, were born in Winston-Salem. They also had a brief stint in Richmond, VA before settling as a family in Basking Ridge, NJ, in 1976. In Basking Ridge, David joined his friend Brian Rogers to continue trading municipal bonds with Rogers & Lamb. When the firm closed in 1989, David found an opportunity to return to the Midwest, first with Commerce Bank and later with the newly opened First Tennessee Capital Markets in Overland Park, Kansas, where he traded and underwrote municipal bonds for the final 12 years of his career. He found joy in his close work with the sales staffs in the Chicago, Dallas, and Memphis offices while there as well.
David lost Pat to brain cancer in 2002 after 35 happy years together. He felt fortunate to find love a second time with Jeannine Allen Fortin, whom he married in 2003. His family expanded greatly with this union, as Jeannine had four grown children of her own.
David retired in 2006 but never slowed down. He enjoyed many rounds of golf with friends and family, and he followed most sporting events, especially those involving the Jayhawks. He and Jeannine also traveled frequently to see their children and grandchildren, to visit friends and favorite locales (oceans and deserts) in the U.S., and even to take an occasional overseas trip. Above all, David treasured the time spent with each of his 16 grandchildren, plugging into their busy daily lives, attending their activities near or far, and prizing the one-on-one conversations they so often shared.
One cannot have known David without knowing his ability to connect with others. He formed community everywhere he went, starting with his beginnings in Atchison, continuing through his educational and work careers as he developed many friendships along the way, and ending with the blended family of 29 who grieves at his passing and celebrates the many shared memories we will carry with us.
We are all better having had David in our lives, with his easy and authentic presence, his genuine interest in us all, his curiosity, his wise counsel (often delivered in few words), and his ability to talk about virtually any topic from history to bond markets to sports to princesses. And of course his eagerness to enjoy a Moosehead beer or two with us.
David was predeceased by his first wife Pat, his parents, and his sister, Victoria Smith. He is survived by his brother, Kirk (Margaret) of Ozawkie, KS; his wife, Jeannine; and his children and grandchildren: Spencer Fast (Katie) and daughters Sophie and Sara; Erin Fast Kopf (John) and children Anna, Owen, and Ian; Kevin Fortin (Brigetta) and children Chase, Layne, and Ava; Brian Fortin (Jen Cullen) and daughters Raven and Lily; Tim Fortin (Jenn) and daughters Renee, Sofia, and Caroline; Kim Fortin Gordon (Brian) and daughters Isabelle, Adrienne, and Avery; and nephews Christian and Benjamin Fast. He is also survived by the many treasured friends near and far who were like family to him.
Memorial Mass, 12:00 Noon, Thursday, February 25, 2021 at Cure' of Ars Catholic Church, 9405 Mission Road, Leawood, KS 66206. Visitation will be from 10:30 until service time at the church.
Memorial contributions may be made to the University of Kansas Cancer Center (High Risk Prostate Cancer Prevention Program), 2330 Shawnee Mission Parkway, Suite 305, Westwood, KS 66205 (https://www.kansashealthsystem.com/giving/donate)

To plant trees in memory, please visit our Sympathy Store.
Published by Kansas City Star on Feb. 24, 2021.
MEMORIAL EVENTS
Feb
25
Visitation
10:30a.m.
Cure' of Ars Catholic Church
9405 Mission Road, Leawood, Kansas
Feb
25
Memorial Mass
12:00p.m.
Cure' of Ars Catholic Church
9405 Mission Road, Leawood, Kansas
GUEST BOOK
Sponsored by Kansas City Star.
8 Entries
We are sorry for your loss, Jeannine. We are thinking of you, Spencer and Erin at this time. Thank you for all of the wonderful times and adventures you spent with our family.
Jill Ludke Dixon
March 2, 2021
Spencer, Erin, Jeannine, We are so sorry for your loss. We have wonderful memories of holidays and vacations with David and Pat. David enriched our lives.
Rita and Steve Lajoie
February 26, 2021
David, you will be very much missed. We haven´t known each other for a great number of years but we consider you a true friend. Until we meet again; but never forget I could always outdrive you!
Celeste and Tony Gogel
February 24, 2021
Our entire neighborhood is going to miss David. He was one of a kind, always positive, never complaining. He set the bar high. We wish that we could have known him longer and we are both going to miss seeing and visiting with him. We admired and respected him very much. Our hearts go out to you, Jeannine, and to all of your family.
Rich and Judy Manka
February 24, 2021
So so sorry for you loss Jeannine. My thoughts are with you along with my most heartfelt sympathy. Seeing David and talking with him on a walk always brightened my day. Such a dear and sweet man.
Rosemary Wayne
February 24, 2021
I remember visiting Dave and Pat in Kansas. My father and Pat's mother were siblings. Dick and Dot always enjoyed their visits. Dave had a wonderful sense of humor and was a gracious host. I know the family will miss him dearly. Love, Carol
Carol Carlson (Mc Hugh)
February 24, 2021
We are so very sorry to hear of David's passing. David was always so kind. We would often talk as he walked Maddie around Brittany Court. He will be greatly missed by all.
Dianna and Harvey Kinnard
February 24, 2021
I am so sorry to read that David has passed. My deepest condolences to Jeanine and all of his family. He will be greatly missed!
Sue Sisk
February 24, 2021