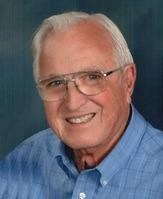 BORN
1929
DIED
2021
FUNERAL HOME
Mt. Moriah, Newcomer and Freeman Funeral Home | Mount Moriah Cemetery Sout
10507 Holmes Road
Kansas City, MO
Joseph B. "Joe" North
March 12, 1929 - September 14, 2021
Overland Park, Kansas - Joseph B. North, 92, of Overland Park, KS, passed away September 14, 2021 at his home. Funeral services will be held on Monday, September 20, 2021 at 11:00 am at Advent Lutheran Church 11800 W. 151st St. The family will receive friends prior to the service beginning at 10:00 am. He will be buried with full military honors at Mt. Moriah Cemetery. Memorials may be made to Heart of America Honor Flight or Little Sisters of the Poor.
Joe was born on March 12, 1929 in Kansas City, MO to Clyde C. and Hazel W. North. He graduated from Redemptorist High School in 1946 where he was on the basketball and baseball teams. In 1951 he joined the army and served in the infantry during the Korean War. Upon discharge, he became a sales rep for American Standard, his lifelong career.
On May 17, 1953 he married Marilyn Johnson. Their family grew to include 3 daughters. He was a devoted husband and father. He and Marilyn were active members of Faith Lutheran Church. After retirement, they traveled frequently until Marilyn became ill. Joe was a compassionate caregiver until her death in 2001. To keep active, he took up racquetball and played with the "Spit and Whittle Gang". He also volunteered for Little Sisters of the Poor.
He reconnected with his high school friends and married Roberta "Bobbie" Cosgrove in 2004. They enjoyed 10 years of happiness together. Following Bobbie's passing, Joe was privileged to take an Honor Flight trip to Washington DC. It was an experience he treasured and shared with others.
Joe chose to move to Tallgrass Creek. He readily made friends there through his neighbor, Ginny Caldwell. They enjoyed playing cards and attended many activities together. Joe served proudly on the veterans committee and encouraged others to sign up for an Honor Flight.
Joe was preceded in death by his parents, brother, Clyde Jr., and sister, Kathryn Burton. He is survived by 3 daughters: Susan (Barry) Childs, Linda (Keith) Palmer, and Laura North; 5 grandchildren and 7 great-grandchildren.
Joe reached out and made a connection with everyone he met. He appreciated every kindness and relationship that touched his life. Joe shared his many life stories with great detail and humor. He will be dearly missed by his family and his large circle of friends.