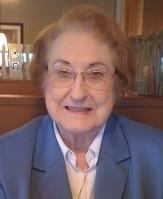 BORN
1925
DIED
2021
FUNERAL HOME
McGilley & Hoge Johnson County Memorial Chapel
8024 Santa Fe Drive
Overland Park, KS
Kathleen (Newhouse) White
January 5, 1925 - August 11, 2021
Prairie Village, Kansas - Kathleen (Newhouse) White died on August 11, 2021. She was born January 5, 1925 in Birkenhead, England. She won a scholarship to, and was graduated with honors from, Birkenhead Girls' School, Birkenhead, England. Kathleen was the daughter of Marie Elizabeth Josephine Kendall and Norman Newhouse. She met her future husband, Martin Manuel White, when he was stationed in Liverpool during WWII. She was just 19 years old when they fell in love and were married on July 14th, 1944. She came to America and later become a US citizen. They had 2 children, Richard Howard White and Sammi Whytecap.
Kathleen represented the Kansas State Board of Education for the 2nd District from 1981-1997, serving a total of 16 years. She was Vice Chair of the Board for two terms, (1983-1985 and 1993-1995) and was then elected Chair for the term 1995-1997.
Kathleen was an active participant in the schools since her children's enrollment. Kathleen served in many leadership roles, which included the PTA, Girl Scouts, Boy Scouts, Friends of the Johnson County Library, United Way, several advisory boards and church. She was a member of Village Presbyterian Church in Prairie Village. Kathleen was a real estate associate for J. C. Nichols for many years. She was a member of Delta Kappa Gamma. Kathleen was an avid lover of dogs, was very proud of her hometown Birkenhead, and lit up when she talked about her children, her upbringing in England, and how she met Martin.
She was preceded in death by her parents; a brother, Jack Newhouse; her husband, Martin Manuel White; her son, Richard Howard White, and her dog, Katie. She is survived by her daughter, Sammi Whytecap of Chandler, Arizona, nieces, nephews, great nieces and great nephews.
A celebration of life will be held Monday, August 30th at 7:00 p.m, with a visitation from 6:00-7:00 at McGilley & Hoge Memorial Chapel at 8024 Santa Fe Dr., Overland Park, KS.
In lieu of flowers, contributions can be sent to Always & Furever Midwest Animal Sanctuary, at 23595 W. 223rd St., Spring Hill, KS 66083.