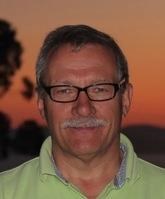 BORN
1953
DIED
2021
ABOUT
Rockhurst High School
FUNERAL HOME
Signature Funerals
406D E. Bannister Rd
Kansas City, MO
Lawrence Ray Burchett III
September 22, 1953 - September 12, 2021
Overland Park, Kansas - Lawrence Ray "Larry" Burchett III, passed away on Sept 12, 2021 after a long and valiant fight against cancer.
Born on Sept 22, 1953, in Leavenworth, Kansas, to Ray and Ann Bielecki Burchett, Larry was the first of their five children. He grew up in the Leawood area, attending grade schools at St. Ann's and Cure of Ars. He graduated from Rockhurst High School, lettering in football, track and wrestling. He developed life-long friendships, and fostered his well-honed sense of pranks and practical jokes. He went on to graduate from the University of Kansas with a degree in Mechanical Engineering, while working a full-time job to pay his way, first in the family to graduate college.
Larry married his high school sweetheart Cheri Boone, settling in Overland Park. He completed his MBA and started working for ARMCO Steel managing a wire rope manufacturing plant. They were blessed with 2 children, Larry IV and Allie. A devoted family man, "Roy" coached both kids in numerous sports, and was especially involved with Allie in basketball and little Larry in baseball. He was further blessed to have 4 grandkids, who loved finding frogs and fishing and playing trains with their "Pa."
After 32 years in the steel industry, he transitioned to CBM for over a decade where he finished his career. He was invaluable at solving problems, and treating people right along the way. He took great pride in and really enjoyed his work in life.
Larry had a great love of the outdoors, especially hunting and fishing with family and friends, and his many highly trained hunting dogs, including Bess, Max, Sam and Moose. This was cultivated early on by hunting trips with his father to Wyoming and Alaska, and continued with fishing trips to Canada and Alaska with both his kids. He led the annual pheasant trip to South Dakota for over a decade with friends and family. In the past year, he got the chance to hunt with his eldest grandson as well.
He was also quite the competitive racquetball player, taking great joy in strategically whipping players much younger and faster than him.
After 24 years of marriage, Larry lost Cheri to cancer in 2001. He held the family together with weekly family dinners for over a decade. He was lucky enough to find love again with Debbie Brown, with whom he shared time with grandkids, and wonderful trips to Ireland, St Kitts, Hawaii.
He was a rock for his family, and will be greatly missed.
Larry was preceded in death by his wife Cheryl Boone Burchett, his father Lawrence Ray Burchett II, his nephews Derek Burchett, Ryan Edwall, Michael Palumbo and Liz Busby, and great-niece Brystol Harper. Survivors include his partner Debbie Brown, his children Larry IV and Allie (Ben) Clark with grandchildren Joe, Ellie, Elizabeth and Henry, his mother Ann Burchett, siblings Cathy Burchett, Mark Burchett (Mari Ann), Tracy Orpin (John Fetters) and Scott Burchett (Tammy) as well as numerous nieces and nephews and countless friends.
Catholic funeral services will be held Friday, September 17 at St Ann Catholic church 7231 Mission Road, Prairie Village, KS, 66208 with visitation from 9:30-11am, followed by funeral Mass at 11am and burial to follow at Resurrection Cemetery.
Donations can be made in his name to the Cheri Burchett Nursing Scholarship: Research Foundation, 2316 E Meyer Blvd, Kansas City, MO 64132, or by going to the website: https://www.theresearchfoundationkc.org/donate/memorialgifts.html
Assistance by Funeral Advocates, LLC. Arr: Signature Funerals, 816-214-5174.

Published by Kansas City Star on Sep. 15, 2021.
To plant trees in memory, please visit the Sympathy Store.
MEMORIAL EVENTS
Sep
17
Visitation
9:30a.m. - 11:00a.m.
St Ann Catholic church
7231 Mission Road, Prairie Village, MO
Sep
17
Funeral Mass
11:00a.m.
St Ann Catholic church
7231 Mission Road, Prairie Village, MO
Funeral services provided by:
Signature Funerals
MAKE A DONATION
MEMORIES & CONDOLENCES
Sponsored by Kansas City Star.
7 Entries
Larry and I met in 1978 and became friends while working at Armco-Union Wire Rope. Some of the experiences we had in the 40 years of friendship were retold every year at the annual Union Wire Rope Wire Meeting. Larry will be missed and I wish him God's speed.
Don Hunter
Friend
September 16, 2021
To the Burchett Family: please accept my condolences on the passing of Larry. I got to know while he worked at Wire Rope and I was the United Steelworkers representative. His character was second to no one. He even got me to take up racquetball and always gave me pointers to help my game. I know he loved his family and even though we hadn´t connected in the past 10 years his professionalism and friendship will not be forgotten. Peace and Love to you all.
Emil Ramirez
Work
September 15, 2021
Our deepest condolences and heart felt prayers to all the family. Larry was a special friend for many years going back to Armco Union Wire Rope days. He will be missed but his memory lives on. God bless.
Don and Jackie Pellow
Friend
September 15, 2021
I'll never forget one Christmas season where I had Larry and friends to dinner. Although I didn't know him well, he was a kind and lovely person to spend time with. After reading about him after his passing, I see that there was so much more to him that I never knew. I wish his family and Debbie peace at this difficult time.
Janis Davis
Family
September 15, 2021
In memory of Larry who loved his dogs and people too.
Janis Davis
Friend
September 15, 2021
Our thoughts and prayers to the entire Burchett family. So many fond memories growing up in the Burchett home with late night pool parties and their Dad being called out on fire. A classmate of Mark, so many fun birthdays and events and seeing all the cool things Larry and his Dad brought back from Alaska. It inspired my own trips to Alaska years later. Growing up with all the Burchetts was a just a big part of growing up! So sorry to see Larry depart us so young. Having lost two brothers so very young, we truly understand and share your pain and loss. Let´s never forget though our faith teaches us it is not a goodbye... it is a " See you later Larry"
Art J Chartrand
Family
September 15, 2021
I'm so sad to hear of Larry's passing. I worked for Larry at Union Wire Rope for a short period during my career path at Armco. Larry was a great engineer and leader, but even a better person, always treating everyone with respect. My condolences to the family. May he rest in peace!
Steve Ornduff
September 14, 2021
Showing 1 - 7 of 7 results