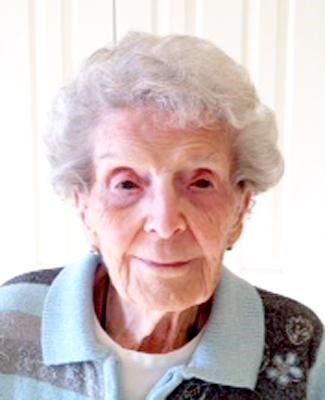 BORN
1912
DIED
2013
MARGARET EMMA LEACH SCHLESKE Margaret Emma Leach Schleske, 100, passed away on November 28, 2013 at Lakeview Village's Centerpoint Care Center. A memorial service will be at 3pm on Monday, December 2nd, at Lenexa Baptist Church, 15320 W 87th St. Parkway, Lenexa. Margaret was born December 12, 1912 to Sarah C. (Owens) and Troy A. Leach in Emporia, Ks. Her family moved to Hutchinson, Ks in 1923 where she graduated from Hutchinson High School in 1930 and Hutchinson Junior College in 1932. In 1935, she received a B.S. in math from Park College. She taught in country schools before accepting a position as an executive secretary at TWA. Margaret later returned to school, receiving a Master's Degree in Nursing from Yale University in 1945. While there, she met her husband, Edward, whom she married December 22, 1945. Margaret worked as a nurse in hospitals in New Haven, CT, New York City, Holdrege, NE and Hutchinson before moving with her husband and 3 children to Valley Stream, New York. She was eventually employed as a public health nurse in Nassau County until her retirement in 1984. She lived in Arvada, Co from 1984 until returning to Kansas in 1993. Margaret was a member of Lenexa Baptist Church. She enjoyed cooking and gardening but put the Lord and her family before all else. Her husband, parents, sister, Sarah Catherine Faeth, and brothers, William A. Leach and James O. Leach, preceded Margaret in death. She is survived by her daughter, Catherine P. Pamperin and her husband, Gregory, of Lenexa, son, James E. Schleske, and his wife, Meredith, of Arvada, Co. and son Daniel A. Schleske, of Napa, CA, 7 grandchildren: Christine, Elizabeth, Lisa and David Pamperin, Sara Schleske Bernal, Laura Schleske Davis and Mark Schleske, 3 nieces, 3 nephews and several great nieces and nephews. The family suggests donations to Crossroads Hospice, 11150 Thompson Avenue, Lenexa, Ks 66219 or the charity of your choice.

Published by Kansas City Star on Dec. 1, 2013.
To plant trees in memory, please visit the Sympathy Store.
MEMORIAL EVENTS
Dec
2
Memorial service
3:00p.m.
Lenexa Baptist Church
15320 W 87th St. Parkway, Lenexa, MO
MAKE A DONATION
Please consider a donation as requested by the family.
MEMORIES & CONDOLENCES
Sponsored by Kansas City Star.
2 Entries
Love you Grandma. You will forever be missed; your generosity and selfless spirit left an indelible mark on everyone fortunate enough to have met you, you made this world a better place. I will miss your hugs, your kind, sweet voice saying "I love you, honey" and your warm smile. I will miss your strength of spirit, your stories (even the repeats :) ) and your apple pies. But as much as I wish you were still with us, I find comfort in knowing that you are finally free, released from the earthly constraints that hindered you at the end. I can only imagine how happy you are now, running and laughing among the angels, reunited with your beloved family and our Lord, all of whom undoubtedly ran to embrace you at the gates of Heaven. I look forward to the day when I will see you again, but until then I will cherish your memory and try my best to follow the example you left us on how to live a compassionate and honorable life here on earth.
Love,
Lisa
Lisa Pamperin
December 1, 2013
I miss her coming to the shop so I could take care of her hair. She had such a sweet tooth. Mints have a whole new meaning to me. She always had to get her mint. What an accomplished women. My deepest sympathy for your loss.
Glenda Adame
December 1, 2013
Showing 1 - 2 of 2 results