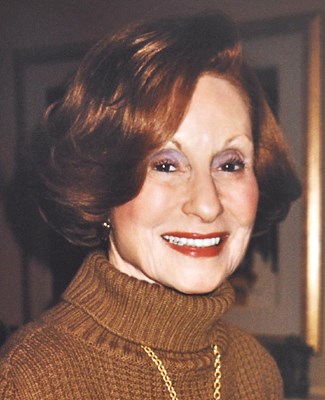 FUNERAL HOME
Stine & McClure Chapel
3235 GILLHAM PLZ
Kansas City, MO
Marion Helzberg Bloch, 83, passed away peacefully on September 24, 2013, in Kansas City. A deeply loved woman who was passionate about her family, she will be remembered for her loving kindness, beauty, and warmth. Having touched the lives of many with her remarkable smile and graciousness, hers was a life well lived. Marion's devotion to her husband Henry as well as her children, grandchildren and great grandchildren will forever influence them and future generations. Family always came first for Marion. The youngest of three children of Hortence and H. Morton Helzberg, Marion was born on July 27, 1930, in Kansas City, Missouri. She graduated from Southwest High School in Kansas City and the University of Missouri. During her junior year of college, Marion's older brother Jim fixed her up on a date with his close friend, a budding entrepreneur named Henry Bloch. Henry was immediately struck by Marion's stunning red hair, her gentle and kind eyes, and her warm smile. During their five-month courtship in 1951, Henry wrote Marion: "My dearest love, I do believe that no man has ever felt such love and honor towards his fiancée. May our next hundred years together help me to prove it. You are beautiful, intelligent, sweet, and with a wonderful personality. And much, much more than I could ever deserve." That summer, one month after Marion's college graduation, the couple was married. Out of necessity, the young Bloch family was thrifty. When Henry finally splurged on a second car, he bought Marion a used Studebaker for $50. And when Marion's brother Howard got married in Birmingham, Henry could afford only one round- trip plane ticket. Marion attended the wedding while Henry stayed home and worked. While Henry ran H&R Block, which he founded with his brother Richard in 1955, Marion ran her household. "The business didn't mean a thing to her," Henry says. But Marion made sure that both of their personal lives revolved around the family. Whether it was spring breaks at their winter home in Phoenix or summer holidays in Martha's Vineyard, Southampton, Aspen, or Europe, Marion made sure that their family vacations were extraordinary. Marion and Henry's friends say that their marriage was made in heaven. "Nothing was missing," one close friend remarked. Henry was enthralled by Marion's warmth, beauty, and kindness. "You are perfect," he often told her. Marion will be forever remembered by Henry, her husband of 62 years, and their devoted children: Robert Bloch (Barbara), Thomas Bloch (Mary), Mary Jo Brown (Robert), and Elizabeth Uhlmann (Paul). She also leaves behind twelve loving grandchildren: Brian Bloch (Allison), Nicholas Bloch, Chase Bloch, Benjamin Bloch, Lynne Greenstein (Andrew), Timothy Brown (Rebecca), Allison Gershon (Brad), Jason Bloch, Edward Bloch, Lauren Blazar (Aaron), Emily Fehsenfeld (Wesley), and James Uhlmann. The couple treasured their seven beloved great-grandchildren: Zachary and Charles Greenstein, Henry and Arthur Brown, Macy Bloch, Thomas Gershon, and Sophie Blazer. Committed to her children's education in the 1950s and 60s, Marion was president of the PTA at their elementary school. Later, she became actively involved in the larger Kansas City community. She served on numerous boards, including the New Reform Temple and the State Ballet of Missouri. With Henry, Marion was at the forefront of countless civic and philanthropic initiatives in Greater Kansas City. Their personal philanthropic legacy includes generous support of arts institutions, and particularly The Nelson-Atkins Museum of Art. Future generations in Kansas City will enjoy Marion and Henry's collection of Impressionist and Post- Impressionist paintings, one of the finest private collections of its type in the world. In 2007, the Museum's new Bloch Building was ranked #1 by Time magazine on its list of the ten best architectural marvels in the world. The couple established the Marion Bloch Missouri Chair in Leadership at UMKC's Henry W. Bloch School of Management. Adjacent to the School is the Marion H. Bloch Terrace and Park, a gift to UMKC from Marion's children to honor their loving mother. In 2012, the couple formed the Marion and Henry Bloch Family Foundation, which is now one of the largest family foundations in the region. At age 58, Marion began a courageous battle with brain cancer. She never complained and bravely endured for 25 years. However, in the last few years her health worsened as a result of the long-term effects of radiation that was required to treat the cancer. Yet she remained a mountain of strength to everyone who knew her. The family appreciates the wonderful people who gave magnificent care to Marion, including her beloved physician and nephew John Helzberg, her primary caregiver Carrie Cameron, and the medical professionals at Saint Luke's Hospital. In 2009, Marion and Henry established the Marion H. Bloch Endowed Chair in Gastroenterology and Medicine at Saint Luke's Hospital. Dr. Helzberg became the first occupant of the chair. The funeral will be a private service for the immediate family only. The public is invited to attend a memorial service at the Atkins Auditorium in the Nelson-Atkins Museum of Art on Monday, September 30, 2013 at 2 p.m. In lieu of flowers, memorial contributions may be made to the Nelson-Atkins Museum of Art, 4525 Oak Street, Kansas City, Missouri, 64111 or St. Luke's Hospital Foundation, 4225 Baltimore Avenue, Kansas City, Missouri, 64111. Online condolences for the family may be left at www.stineandmcclure.com

Published by Kansas City Star on Sep. 26, 2013.
To plant trees in memory, please visit the Sympathy Store.
MEMORIAL EVENTS
To offer your sympathy during this difficult time, you can now have memorial trees planted in a National Forest in memory of your loved one.
Funeral services provided by:
Stine & McClure Chapel
MAKE A DONATION
MEMORIES & CONDOLENCES
5 Entries
In loving memory of a great neighbor and childhood friend
Richard Holzmark
September 28, 2013
What a gentlewomen married to a gentleman! Our prayers are with you Mr. Bloch and with your wonderful children! Your family continues to be an example for Kansas City. Thanks for all you have done and may we now give back through our prayers for strength from God as you go through these next difficult days. God bless You and yours.
Janet Pasternack
September 28, 2013
Henry,and all. I have never known a sweeter or kinder person than Marion. Hope your wonderful memories of her will help ease your grief. Please accept our deepest sympathy.
Adrianne,Ronny Greenberg
September 27, 2013
Henry, Bob, Tom, Mary Jo, & Liz,
I knew your wife & mother mostly through Sue Meyer Burstein, my former husband Steve's mother. They had a very special freindship. I was always so touched by how Marion would remember me whenever I would run into her(in spite of the wealth of people in her life), and just how genuine and gracious she always was. She was a truly kind and loving woman who will surely be missed by so, so many.