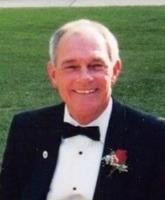 BORN
1948
DIED
2020
ABOUT
Bishop Miege High School
FUNERAL HOME
Porter Funeral Home
8535 Monrovia
Lenexa, KS
Michael Berry
April 29, 2021
Lenexa, Kansas - Michael (Mike) James Berry, age 72, passed away at his home in Lenexa, KS on April 29, 2020, due to complications of ALS. A small burial was held May 7, 2020, at Resurrection Cemetery. A memorial mass will be held Saturday, September 11, 2021, at 10:00am at Holy Trinity Catholic Church, 13615 W. 92nd St. Lenexa KS.
Mike was born on March 2, 1948, in Kansas City, KS to John (Jack) and Aileen (Dobel) Berry. He grew up in Mission, KS, and attended St Pius X Catholic School. He loved to serve mass and did so well into high school as he was one of the first altar boys in the parish. Mike graduated from Bishop Miege High School in 1966. He enjoyed his high school days and made lifelong friends. He attended Wichita State University (go Shockers!) making more friendships along the way.
Mike proudly served in the Navy Active Reserve and was mobilized to San Diego during the Vietnam War from 1970-1971. After returning he was introduced to Sheila by her Aunt Leona, the matchmaker in the family. Mike and Sheila were married May 12, 1972 at Queen of the Holy Rosary Church. They were blessed with 48 wonderful years together and raised two amazing children- Chris and Laura.
Mike was an avid sports fan. He grew up caddying at Milburn Country Club where he enjoyed playing golf, and was once chosen as caddy of the year. He also loved playing underhand fast-pitch city league softball as he hit many homeruns aiding his team to tournament victories. He coached both of his children in various sports throughout the years and recently enjoyed watching his grandson, Tate, play basketball and flag football. In addition to participating and coaching, Mike also enjoyed tailgating with family and friends in Lawrence to watch KU as it was a favorite pastime of his.
Mike and Sheila loved their trips to the Lake of the Ozarks with Chris and Laura, extended family, and friends. Long rides on the pontoon boat, coving out, and in later years, the two of them watching the sunset and enjoying delectable dinners at J.B. Hooks, Mike with martini in hand. Mike's lifelong dream was to see Alaska, and he and Sheila were able to take that dream trip, his last, in 2019.
Mike cherished his Catholic faith. He was a member of Holy Trinity parish for 44 years and ushered for several years at the 5:00pm mass on Saturdays. He never removed his scapular medal and was devoted to his patron saint, St. Michael the Archangel. Mike and Sheila were very involved and devoted to fundraising at both Holy Trinity Catholic School and St. Thomas Aquinas High School as fervent advocates of catholic education.
Mike worked successfully as a manufacture's rep for nearly 30 years. He represented lines such as WD-40, Zebco, Ski Optics, Polar Max, Telux, and an assortment of other sporting goods. In the last 10 years of his life, Mike found his final employment as an independent courier. His alarm went off every morning at 4:00am, 5 days a week.
Mike was a good, honest, and disciplined man. He had a dry sense of humor. He always had a clever comment, and frequently expressed what others lovingly called "Mike-isms." He was a wonderful husband, great father, brother, son, loving Popo, and loyal friend.
Mike's diagnosis of ALS was a big shock to all and came only 6 weeks before his passing. He was in tremendous anguish, but never complained and was thankful for God's blessings. His last wish was to visit the Shrine to St. Philippine Duchesne in Mound City, KS. He had a great devotion to St. Philippine and said her novena prayers every day. He passed away 3 days after visiting the shrine.
He was preceded in death by his parents, his brother Mark, in-laws Robert and Esther White and brother-in-law, Mark White. Mike is survived by his loving wife, Shelia (White), son Chris (Lisa) Berry, daughter Laura (Mike) Brogdon, grandson Tate Berry, and granddaughters Haley and Rylee Brogdon. He also leaves behind sisters Denise (Bennett) England and Lynn Berry, brother-in-law, Rob (Lisa) White, and sister-in-law Cheri White, as well as multiple cousins, nieces, and nephews in multiple generations.
Many donations were made after Mike passed away, but for those who missed, donations may be made in memory of Michael J Berry to: Bishop Miege High School: 5041 Reinhardt Dr., Roeland Park, KS 66205, Holy Trinity School: 13600 W. 92nd St., Lenexa, KS 66215, orSt. Thomas Aquinas High School: 11411 Pflumn Rd., Overland Park, KS 66215