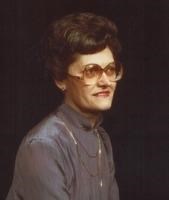 BORN
1933
DIED
2021
FUNERAL HOME
COUNTRYSIDE FUNERAL HOME - JOHNSON CHAPEL
101 N. Highland
Chanute, KS
Norma Bark
October 11, 1933 - July 19, 2021
Lee Summit, Missouri - Norma Dean Bark, 87, a long time Lee Summit resident, passed away Monday, July 19, 2021 at her daughter Karen's home in Kansas City. Norma was born on October 11, 1933 in Oklahoma the daughter of Theodore Roosevelt and Elsie Pearl (Richardson) Lawson.
After high school, Norma graduated from Draughon's Business School in Tulsa, OK and began her career leading to several Executive Assistant positions. One of her early positions in Kansas City, was with Burns & McDonnell where she met her future husband, a Civil Engineer. On October 11, 1957, Norma married Chester Lloyd Bark in Southwest Missouri on the way to New Orleans for a honeymoon. Norma and Chet were married for 21 years until his death on May 9, 1979. They spent their life together making many moves, raising children and working for Burns & McDonnell. After his passing, she lived 40 years in Lee's Summit working both for Burns & McDonnell and later Longview Community College. She had an amazing work ethic, was proud she could do about anything, and continued volunteering well into retirement.
Norma was a member of the Longview Alumni Association and volunteered as an Ombudsman for John Knox Village and at the Lee's Summit Senior Center. Norma also enjoyed her garden, traveling with friends and family and always had a dog by her side including Heidi, Molly and Jasmine. She valued education and encouraged and assisted her children and grandchildren to pursue excellent grades and a degree. She enjoyed many recitals, games and awards assembly with her grandchildren.
Norma is survived by:
Children: Lindley Bark and wife Sibylle, Karen Schoettlin and husband Phil, and Kathy Bark
Siblings: Wilma Flaspohler, Jack Lawson, Melba Vincent, Richard Lawson, and Pamela Ward
Six Grandchildren: Brittany Bark, Sydney Benton and husband Zach Terrell, Jenn Bark, Lawson Schoettlin, Destin Bark, and Jonathan Kennedy.
Norma was preceded in death by her parents, husband Chester and many wonderful friends.
Funeral services will be held on Friday, July 23, 2021 at 11:00 am at the Countryside Funeral Home, 101 N. Highland, Chanute, KS 66720 with visitation at the same location between 10:00 and 11:00 prior to service time. Burial to follow at Memorial Park Cemetery, Chanute. Donations in her honor support the Alzheimer's Association. Online condolences may be left at www.countrysidefh.com Services are under the direction of Countryside Funeral Home 101 N. Highland, Chanute, KS 66720.