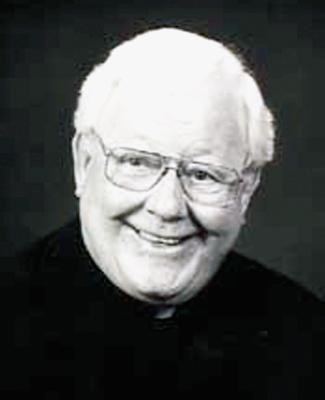 BORN
1931
DIED
2014
Fr. Norman F. Rotert, 83, retired priest of the Catholic Diocese of Kansas City-St. Joseph, died December 17, 2014, at Kansas City Hospice in the company of his immediate family and close friends. A Vigil service will be Sunday, Dec. 21, at Visitation Church beginning with a prayer service at 6 p.m. followed by a visitation until 8 p.m. The Mass of Resurrection will take place at 10 a.m. Monday, Dec. 22, at the church. Father Rotert was born June 22, 1931, in Montrose, Mo., eldest son of Clem (Butch) Rotert and Freda M. (Cook) Rotert. He was preceded in death by his parents, brother, John E. Rotert and John's wife, Bettie. Survivors include his brother, Philip L. Rotert (Jeanne), Leawood, Kan., sister, Theresa R. Kempf (Gordon), Mission, Kan., nieces and nephews, Elizabeth Recker (Robert), Suzanna Smith, Omaha, Neb., George Rotert (Anne), Urich, Mo., Paul Rotert, Appleton, Mo., William Rotert (Robin), Clovis, Calif., Tom Rotert (Bedonna), Laguna Beach, Calif., Timothy Kempf (Sarah Hilliker), San Francisco, Calif., Jennifer Rotert, Jonathan Kempf, Mission, Sarah Coleman (Dwight), Leawood, and John Rotert, Kansas City, Mo., and 24 grand nieces and nephews. Ordained to the priesthood in 1957, Fr. Rotert served in eight parishes including pastorates at St. Therese Little Flower, St. Peters, St. Charles and Visitation. From 1984 until 1994 he was Vicar General of the diocese. A source of strength and vision, a man of integrity, wisdom and compassion, he championed the poor and practiced justice. Father Rotert's response to the call of priesthood took him far beyond the Catholic community to work that improved the lot of all humankind in pursuit of the common good. With two priest friends he initiated a Kansas City delegation of religious leaders to march for civil rights in Selma, Ala. The commitment to justice remained throughout his life as his call to serve the People of God led him to work on the 49/63 Project, founding membership in the Blue Hills Corporation, a community development corporation, and procurement of a real estate broker's license to make a difference for good in the city. He was a founding member of the Kansas City Organizing Project (KCOP), a church-based ministry which thrives today as Communities Creating Opportunity (CCO). Father Rotert served on numerous national and local boards including the Pacific Institute for Community Organizing (PICO) and the Center for Practical Bioethics and Rehab Loan Corporation. He served on a citizen's advisory committee on housing and neighborhood preservation and helped raise millions of dollars for organizations such as the Community of the Good Shepherd and an endowed chair at the Center for Practical Bioethics. Father Rotert's final fund-raising effort culminated in the renovation of Visitation Church and School buildings ensuring that the parish community would endure for generations to come, and that the sacramental life of Visitation Church would continue to be the source and summit of its existence. In lieu of flowers, the family requests donations to Bishop Sullivan Center or Visitation Catholic Church. M

To plant trees in memory, please visit our Sympathy Store.
Published by Kansas City Star from Dec. 19 to Dec. 21, 2014.
MEMORIAL EVENTS
Dec
21
Prayer Service
6:00p.m.
Visitation Parish, 5141 Main Street, Kansas City
Dec
21
Visitation
8:00p.m.
Visitation Parish, 5141 Main Street, Kansas City
Dec
22
Mass of Christian Burial
10:00a.m.
Visitation Parish, 5141 Main Street, Kansas City
GUEST BOOK
15 Entries
Always was touched by the fact my husband died on a Dec 17 and Fr Rotert said his funeral on Dec 21 nine years before his own death and funeral on the same days 9 years later. Fr. Rotert was a kind priestly man, I miss his friendship and guidance.
Mary OConnor
Friend
December 13, 2019
Fr Rotert helped with my husbabd's funeral mass on Dec 21 2004 then baptized our grandson on Christmas Day.Father Rotert was a priestly man and a blessing to our fsmily
January 4, 2015
So sorry for your loss, if I ever meet Fr Norman I do not recall but all the stories I read online are so inspiring and proves what a difference one person can make.
Connie Rotert-Hartmann
December 23, 2014
I seldom post very personal things on the Internet, but I'm moved to do so this time in memory of my mother and this dear cousin of hers, Father Norman Rotert, who I just learned passed away last week. We all knew he was something special in the larger sense of the community (as everything I'm finding online points to, including being involved with the March on Selma and working towards peace and social justice in the Kansas City community), but we knew him as a lovable family member. He was the surprise guest at one of my birthday parties as a young adult. He was always at the Rotert family reunions, and though a humble man, it was like he had the crowd as his fan club; we waited in line for the chance to speak with him. At my mom's request, he personally signed a copy of his book and gave it to her at the last reunion she attended. He concelebrated Mass at my Father's funeral. And though aging, he led the rosary for my Mother's. At that time, he quietly joked at the end, "Florene was my cousin. I was a groomsman at her wedding to Don. It was the closest I ever got to being married!" At that moment, he brought a smile back to our faces and hearts, as he always managed to do. Rest in piece, Fr. Norman, with much love from our family. Sharyl McMillian-Nelson (granddaughter of Edward Rotert)
Sharyl McMillian-Nelson
December 22, 2014
Father Rotert made a difference in many people's lives. I have heard from some of those people he had influence on. I met him once only in passing at a CCO (Communities Creating Opportunity) event in the past two years. I wished I had known him. I know many people who did know him and have great respect and admiration for his leadership in our Kansas City community. I am reading his book, "Weaving The Vision: Stories of Faith For the Sons and Daughters of God." I send my sympathy and condolences to his family and friends.
Janet Archer
December 22, 2014
Once again God wins out, now there's another great man in heaven. Norman's wisdom and support as well as his charm at guiding others to the light of Christ will be missed, but his love for so many will continue to bring postive change and continued hope to the Church he so loved.
Father Ron Verhaeghe
December 22, 2014
Fr Rotert came into Meiners Grocery one evening fairly shouting that St Peter had beat Christ the King. Theologically speaking that would have been bad news, but in terms of basketball it must have been good. I hear he was a wonderful fellow who always had the interests of the poor at heart.
Kate Zon
December 21, 2014
Norman Rotert was one of the greatest pastors that I have ever known. He took me under his wing when I came to Kansas City in 1970 and made my transition from a Jesuit high school teacher to a pastor a very joyful one. He made an incredible
impact on the Catholic Church in the KC area; we were blessed to have such a priest among us.
Father Luke Byrne S.J.
December 20, 2014
Many prayers and thoughts to the family. He will always be remembered in our hearts. So very sorry for this loss. Dennis Hake and Jennie Wheeling
December 20, 2014
Fr. Norm. Was a GIANT of a man. He will be missed. He left the world a better place. The Lord will be glad to see him.
Al Sondern
December 19, 2014
I am sorry for your loss. Please know the God of all comfort sees your pain and will soon eliminate sickness and death by means of his Kingdom in which we pray for in the Lord's Prayer (Mat 6:9-13). Once more I am sorry for your loss. Please take care. – Andrew
December 19, 2014
Condolences to all those in pain over the loss of Fr. Rotert. I remember him as a great pastor and family friend at St. Peter's in the 1980s. Here's a link to a nice article and picture of him: http://catholickey.com/index.php3?gif=news.gif&mode=view&issue=20070622&article_id=4562 Rest in peace Fr. Norm.
Brandon Stegall
December 19, 2014
You gave a lot to a lot of us, thanks...You will be missed but definitely not forgotten..
Jeff Clayton
December 19, 2014
Good-bye, Norm, say hello to Mom (she's the one with the hat). You will be missed but never forgotten. Anita
Anita Striegel
December 19, 2014
A great priest, pastor and friend. Norm's passing is a loss for our entire community. His Church and Civic leadership helped thousands of persons. We owe him so much. May he rest in peace.
Timothy Degnan
December 19, 2014