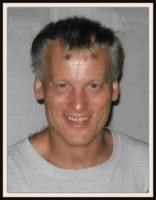 BORN
1965
DIED
2021
FUNERAL HOME
O'Connell-Benedict Family Funeral Homes - Prescott
1339 Orrin Road
Prescott, WI
Peter Scott Anderson
October 25, 1965 - July 25, 2021
Hudson, Wisconsin - Peter Scott Anderson passed away on Sunday, July 25, 2021 at Comforts of Home in Hudson, WI after a long battle with Huntington's disease. Pete was born to Arlene and James T. Anderson on October 25, 1965. Pete graduated from Prescott High School with the Class of 1984. He went on to UW Stout and received a degree in Manufacturing Engineering. While working, he received his MBA from Georgia. He was so proud that all three of his sons followed in his footsteps and became engineers.
Pete liked to play sports and took pride in his yard in Lee's Summit, MO. Specifically, he liked to grow raspberries. He loved playing cards, playing and watching sports, and hanging out with his boys. They were his pride and joy. One of his favorite activities was watching the Vikings play on Sunday. Pete was diagnosed with the Huntington's in 2010. He moved back up to Wisconsin in 2014. Even though Pete's Huntington's diagnosis made his life a struggle, he persevered and never complained.
He is survived by his sons, Bryan (girlfriend Lydia), Tyler (girlfriend Melaina) and Clayton (girlfriend Carly); siblings, Ted (Joy), Steve (Becky), Vicki Fredine, Peggy (Scott) Jensen, Mark (Kim), and Amy (Terry) Beltrand; and many nieces and nephews. He was preceded in death by his parents.
Funeral services will be held at St. John's United Church of Christ, N5496 County Road QQ in rural Prescott, WI on Sunday August 1st at 2:00pm. Visitation will be held 1 hour prior at the church. Memorials are preferred to the discretion of the family. Services provided with the assistance of the O'Connell-Benedict Funeral Home of Prescott, WI. www.oconnellbenedict.com