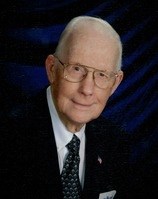 BORN
1930
DIED
2021
ABOUT
William Chrisman High School
FUNERAL HOME
Cremation Society of Kansas & Missouri - Kansas City
5561 Northwest Barry Road
Kansas City, MO
Ray Eugene McClaran
November 23, 1930 - September 18, 2021
Independence, Missouri - Ray Eugene McClaran, Jr., 90, of Blue Springs, passed to his Heavenly Father on September 18, 2021.
Ray was born November 23, 1930, to Ray, Sr., and Wilma (Harryman) McClaran in Kansas City, MO. The family moved to Independence, MO in 1933 where he resided most of his life. He was a member of the First Presbyterian Church of Independence and its Boy Scout Troop, where he became an Eagle scout. He served as an ROTC Captain at William Chrisman High School, graduating in 1948.
Ray attended Kansas City Junior College, then transferred to Northwest Missouri State College (now Northwest Missouri State University) in Maryville, Missouri, graduating in 1952 with a degree in accounting. He was employed by the CPA firm of Sinderson, Henning, and Mueller, earned his CPA designation, and, in 1966, became a partner. The firm merged with Arthur Young & Co. in 1967, and he left in 1971 to become Financial VP/Comptroller for Hudson Oil Co.
In 1959, Ray became a member of the Reorganized Church of Jesus Christ of Latter Day Saints, now known as the Community of Christ, and accepted appointment as a full-time minister in 1975. He served as Bishop of St. Louis Stake from 1976 to 1978 and then became a member of the Presiding Bishopric until 1992. He retired from church appointment in March 1993 and continued to perform audits for various church jurisdictions for many years.
Ray was a charter member of Battery D, 129th Field Artillery Battalion of the MO National Guard. He later commanded Company B, 135th Signal Battalion and retired with the rank of Captain after twenty years of service.
He married his beloved Katie Cooper on November 27, 1954, at the RLDS (Community of Christ) Stone Church in Independence, where they were members most of their married life. Three children were born to this union. He loved home and family and was a devoted husband and father. Katie preceded him in death in 2013. He later found a companionship with Betty Minton and they were married on November 25, 2017. They enjoyed four years together and Betty was a loving caregiver in his final months.
Once, Ray was introduced as "a gentle man" to a class he was to teach, and that is who he truly was. He took the Boy Scout Creed very seriously, always wanting to be kind and helpful to others. When asked to take any responsibility, he didn't know the word "no." During his working years and all his life afterwards, he assisted many people with financial matters, including taking the responsibility of power of attorney, and settling many estates. He loved to be of service to church and community, including as a member of the Rotary Club and participating in community projects such as the Independence School District's Project Shine.
He leaves to cherish his memory: wife Betty Minton McClaran, Blue Springs; daughters Brenda Allen and Sheryl McClaran, son Dale McClaran and wife, Valerie, all of Independence; grandchildren Brad Allen, Brent Allen, Lindsey McClaran, and Collin McClaran; brother John McClaran and wife Sue of Bolckow, MO; two nieces, Sandy Conley and husband David, and Janie Cunningham and husband Jon; five great-nieces, three great-great-nephews, and one great-great-niece; Betty's daughters Kelly Williams and husband Kenneth, and Dr. Julie Moore and husband Bradley; four grandchildren, and two great-grandchildren.
A memorial service will be held at the Colonial Hills Community of Christ Church, 3539 MO-7, Blue Springs, MO on Sunday, October 10, at 3:00 p.m. Visitation will precede the service beginning at 1:30 p.m. The service will be streamed live and may be viewed at youtube.com/c/colonialhills. Contributions are suggested to the Bridge of Hope fund of the Community of Christ Church, ATTN: Mission Funding, 1001 West Walnut Independence, MO 64050. Please include Bridge of Hope in the memo line.

Published by Kansas City Star on Sep. 26, 2021.
To plant trees in memory, please visit the Sympathy Store.
MEMORIAL EVENTS
Oct
10
Visitation
1:30p.m.
Colonial Hills Community of Christ Church
3539 MO-7, Blue Springs, MO
Oct
10
Memorial service
3:00p.m.
Colonial Hills Community of Christ Church -- The service will be streamed live and may be viewed at youtube.com/c/colonialhills .
3539 MO-7, Blue Springs, MO
Funeral services provided by:
Cremation Society of Kansas & Missouri - Kansas City
MAKE A DONATION
MEMORIES & CONDOLENCES
Sponsored by Kansas City Star.
4 Entries
We're so sorry to hear of your dad's passing. May you rest in the peace of God and find comfort in loving memories.
Julie & Jerry Skotak
October 15, 2021
Betty,Dale,Val,Brenda,Sherry and grandchildren. I am very sorry to hear of Ray´s death! He will be missed by many people, including me! My sympathy and condolences to all of you ! Sincerely, Kent Roberson
Kent Roberson
September 26, 2021
Betty, Dale, Val, Brenda, and Sherry, and all of Ray´s grandchildren.I heard of Ray´s death and i am sorry he is gone! My sympathy and condolences ,KentRoberson
Kent Roberson:
Friend
September 26, 2021
Sending up prayers of peace for you all. Ray was such a wonderful person. We are so sorry for your loss.
Terri & Jeff Randol
Family
September 23, 2021
Showing 1 - 4 of 4 results