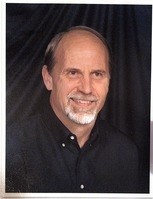 BORN
1952
DIED
2021
FUNERAL HOME
Cremation Society of Kansas & Missouri - Kansas City
5561 Northwest Barry Road
Kansas City, MO
Richard K. Baldwin
September 16, 2021
Lees Summit, Missouri - May 5, 1952 – September 16, 2021. Son of Ruth and Eberle Baldwin, Richard grew up in Bartlesville, OK, where he graduated from Sooner High School in 1970. After graduating from Oklahoma State University with an accounting degree in 1974, Richard joined the Air Force when his Vietnam War lottery number was drawn. Instead of being sent to Vietnam, Richard was stationed in Upper Michigan, and after serving his two years, he left with the rank of 1st Lieutenant in 1976.
Richard worked as an accountant before finishing his career with Vance Brothers, Inc. in Kansas City where he retired in 2016 after serving as Chief Financial Officer for fifteen years.
Richard was first and always a strong and dedicated Christian. His optimistic and happy personality stemmed from his belief that God is always in charge and will take care of everything. He was active in his church and enjoyed leading Bible classes and groups.
Richard was a lifetime athlete. He began swimming at age eight and won a national competition at age ten. He swam throughout high school, where he was named a High School All-American, and he attended college on a swimming scholarship. He continued to swim throughout his adult life, and regularly competed in Master Senior swimming events. He still holds several state swimming records in Missouri to this day. He loved the pool, and it is fitting that the stroke that ultimately ended his life happened during his regular morning swim. Richard also loved playing softball and was named Softball All-American in 1976. He regularly played softball with local recreational leagues. In Richard's last game before his Parkinson's sidelined him, he finished the game with a walk-off grand slam home run and commented that it sure felt good.
Richard was preceded in death by his parents and leaves behind loving wife Candice Baldwin, sons Chris (Erin) and Jonathon (Courtney) Baldwin, step-daughters Julialicia Case (Tony Magagna) and Katie Case, brother Gary Baldwin (Judi), sister Janis Blades (Barry), and aunt Sue Campbell as well as five grandchildren and numerous nephews and nieces.
Richard inspired others with his determination to keep moving and his refusal to let Parkinson's disease get him down. Celebration of Life service will be September 28, 2 p.m. at The Summit Church in Lees Summit. Visitation with the family will be at 1 p.m. In lieu of flowers, donations could be made to The Parkinson's Foundation, www.parkinson.org.