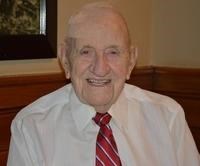 BORN
1922
DIED
2021
FUNERAL HOME
McGilley Memorial Chapel
12301 State Line Road
Kansas City, MO
Robert "Bob" W. Gaughan
August 13, 2021
Leawood, Kansas - Bob Gaughan was born on May 18, 1922, to Irish immigrants from Counties Mayo and Limerick on the Gaughan family farm (original homesteaders) south of Centralia, Kansas. He was the ninth - and last living - of eleven children. He attended a traditional rural one-room elementary school and his teachers were often his own older sisters.
He moved to Kansas City in January of '41 to begin training as an aircraft mechanic. Two months later he began his 31 year career - and love affair - with TWA - starting at 42 cents an hour. The first week of December 1941, he helped service an early morning TWA flight that included two Japanese officials on their way to Washington, D.C. He saw them de-board the plane and go in the airport restaurant. After the "Day of Infamy", he learned these were the two officials that were supposed to be negotiating peace with our government – when, in fact, the Japanese were beginning to bomb Pearl Harbor. After Pearl Harbor, TWA was on constant call for the government and, among other duties, Bob trained military mechanics for the civilian DC-3/military C-47 airplane used by the Army Air Corps. Because the functions he performed were so important to the war effort, TWA restricted him from enlisting - but that didn't stop him. In November of 1943, he traveled to his hometown to coerce a friendly Centralia- area recruiter to allow him to join the Army Air Corps. Based in Ramsbury, England, and later in France, Bob flew 13 combat missions as Aerial Engineer (9 th Air Force, 84 th Squadron, 437 th Troop Carrier Group) dropping paratroopers & supplies and transporting gliders. He earned an Air Medal with 2 Oak Leaf Clusters. His combat missions included the Bastogne and Market Garden operations (about which the movie "A Bridge Too Far" was made). He also transported emaciated French POWs home – a mission he said he would never forget.
After the war, he returned to TWA in KC where he became a flight engineer, both flying and training, and later became a pilot. He greatly enjoyed having a few interesting personal conversations about flying with TWA owner Howard Hughes when Mr. Hughes was in town (TWA world headquarters back then). He flew domestic and international flights, including a flight around the world. His closest, life- long friends were his TWA colleagues. And, thanks to his job, his family was able to travel frequently. After TWA, he became a highly successful Realtor with Cliff Brisbois and Summerson-Burrows, working well into his 70s. Dad met our Mom, Jo Ann (Griggs), at TWA where she was a flight attendant. They married at Visitation Catholic Church on New Year's Eve 1949 and began their family in 1951. They built their first home in Prairie Village in 1952 and many neighbors became great friends as well. In 1965, they built a new home in Leawood where Dad lived to his final days. In Prairie Village, he was a member of St. Ann's Catholic Church but switched to Curé of Ars with the Leawood move. Sadly, Mom died in 1999.
After God, the Church, and family, Dad's greatest loves were airplanes, the Chiefs, and the Royals. He shared annual season tickets to Chiefs games with a close TWA friend in the early years. Games were always on in the car, and he rarely missed a game on TV. He'd been an athlete as a student and enjoyed a hole-in-one at the former Prairie Fields Golf Course in Prairie Village before starting our family. He served as head coach for Jeff's little league baseball teams. He was an avid reader his entire life. He loved his daily KC Star newspaper. In recent years, he had immersed himself in books about World War II.
Dad was such a gentle man - kind, humble to a fault, charitable, sensitive, fun, deeply religious, completely honest, respectful of all, and genuine to the core – and yet one of the strongest, toughest, most resilient hombres on the planet. When we needed him, he was ALWAYS there for us. We've enjoyed a lifetime of glowing compliments about Dad from so many people. It would take a book to tell all his life stories. This is just a broad outline of a life beautifully lived for over 99 years.
Surviving Bob are son, Jeff Gaughan (Leawood), and daughters Penny Zadeh (Overland Park), and Jill (John) Jenia (Leawood); grandchildren Dr. Amy Gaughan, Bob (Dr. Jessica) Gaughan, Lucas Gaughan, Valerie Gaughan, Carly (Brett) Keim, Nick Jenia. Mikey Jenia; step-grandsons John (Toni) Jenia, and Jason (Michelle) Jenia; great grandson's Bradyn Gaughan and Rowen Keim; and many devoted nieces, nephews, and friends.
Visitation is Tuesday, August 17, 6-8 p.m., at McGilley State Line Chapel, 12301 State Line, KCMO. Rosary 9:30 a.m. and Mass at 10:00am at Curé of Ars Catholic Church, 9401 Mission Rd, Leawood with committal services following at Resurrection Catholic Cemetery, 8300 Quivira Rd, Lenexa. Services can be watched at www.mcgilleystatelinechapel.com. Find obituary, then click "Join Livestream". In lieu of flowers, please consider donations to Catholic Charities or the charity of your choice.

Published by Kansas City Star from Aug. 15 to Aug. 17, 2021.
To plant trees in memory, please visit the Sympathy Store.
MEMORIAL EVENTS
Aug
17
Visitation
6:00p.m. - 8:00p.m.
McGilley Memorial Chapel
12301 State Line Road, Kansas City, MO
Aug
18
Rosary
9:30a.m. - 10:00a.m.
Cure of Ars Catholic Church
9401 Mission Rd, Leawood , MO
Aug
18
Funeral Mass
10:00a.m.
Cure of Ars Catholic Church
9401 Mission Rd, Leawood , MO
Aug
18
Committal
Resurrection Catholic Cemetery
8300 Quivira Rd, Lenexa, MO
Funeral services provided by:
McGilley Memorial Chapel
MAKE A DONATION
Please consider a donation as requested by the family.
MEMORIES & CONDOLENCES
Sponsored by Kansas City Star.
3 Entries
I just read about your father´s death. I´m so sorry I found out so late. I didn´t know him very long but I knew he was someone special. Take care.
Ginny Bennett Hesler
Family
September 26, 2021
My sincere sympathies Jill, on the loss of your dad. I always enjoyed hearing stories about him. I know he will be truly missed, but his legacy lives on in you and your family. His work here on earth is complete; his eternal reward is now his glory. Hugs.
Karen McDonald
August 16, 2021
Mr. Gaughan was always "Mr. Gaughan" to me since I was a little girl. He and his wife, Joanne, were fast, faithful friends to my parents to the ends of their lives. The world is poorer for his leaving. Having been a presence nearly my whole life, he will be missed for the rest of my life. Peace be with you.
Judy Greene
August 15, 2021
Showing 1 - 3 of 3 results