BORN
May 29, 1923
DIED
March 14, 2019
Roger F. James Roger F. James, 95, of Overland Park Kansas, passed away on March 14, 2019. Roger was born on the family farm on May 29, 1923 to Ralph and Esther Feilbach James. He graduated from Eudora High School and the University of Kansas. He served his country in WWII in the 14th Armored Division, Company C. He was awarded the Purple Heart and 3 Bronze Stars. Upon his return from the war, he met and married the love of his life, Joan Happy. They were married 63 years before her passing and together they raised 3 children, Andy (Laura) Evan (Joanie) and Karen McHugh (Kevin). They have 8 grandchildren and 12 great-grandchildren. Roger was a Kappa Sig at KU and later named Man of the Year. He founded James Printing in 1970 and was named PIA Printing Executive of the Year in 1989. Roger served as Scoutmaster of Troop 84 for 20 years. He was a longstanding member of Country Club Christian Church, serving as Chairman of the Board of Elders and member of the Tri-C's Sunday School class. He was a proud member of the Sons of the American Revolution and Sertoma. In 2015 he was awarded the French Legion of Honor for his service during the war. He was preceded in death by his wife Joan and sister Patricia Baker. A Visitation will be held from 10:00am to 11:00am followed by an 11:00am Funeral Service on Wednesday, March 20 at Country Club Christian Church, 6101 Ward Parkway, Kansas City, MO. In lieu of flowers, contributions may be made to Country Club Christian Church. Condolences may be left at www.mtmoriah.net. 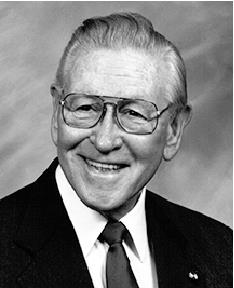