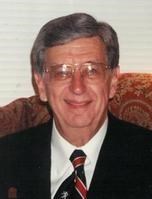 BORN
1934
DIED
2021
ABOUT
William Chrisman High School
FUNERAL HOME
Speaks Suburban Chapel
18020 E. 39th St. S
Independence, MO
Ronald Eiman
November 24, 1934 - May 30, 2021
Independence, Missouri - Ronald Ray Eiman passed away peacefully at age of 86 from the residual effects of bulbar polio on May 30, 2021 at KU Medical Center. He was bom November 24, 1934 in St Joseph, Missouri, the only child of Karl Henry Eiman and Sophia Bieri Eiman. Ron grew up in Independence, Missouri, graduated in 1952 from William Chrisman High School and earned his Bachelor of Science degree in business administration/accounting from Central Missouri State College, Warrensburg, Missouri.
Ron began his career in 1956 at TWA where he was employed as an accountant for 41 years.
While employed at TWA he was drafted into the United States Army from October 19, 1956 to
January 29, 1959. Majority of the time was served at the United States Military Academy at West Point, NY. While serving at West Point he contracted bulbar polio which affected him the rest of his life.
Ron dedicated his time and energy playing an active role in the community, serving as President of the Independence Jaycees and Vice President of the Missouri Jaycees, a JCI Senator, and President of Jackson County Sheltered Workshop/IBS Industries for the developmentally disabled (now known as Job One). He served on the board of Jackson County Mental Health, the Rainbow Board of Directors and the initial Jackson County Board of Services for Developmentally Disabled. He was a passionate advocate for them.
Ron married Becky Vollenweider on Aptll 6, 1977 followed by a reception on May 1 at the Alameda Hotel with champagne flowing freely and hors d'oeuvres served "Ron Eiman" style, that is, with perfection.
He enjoyed organizing high school reunions for many years. Little did he know how much these skills would be used when he joined the large Vollenweider family. They soon became a huge part of his life, just as he was of theirs. The family considered him the best and the most attentive host of the bunch. He had a wit that never missed.
He and his friends stayed connected throughout his life from first childhood friend (Jack), to high school (reunions), college Mizzou football gang, army buddies, Jaycees, work, and Panera coffee club and the list goes on.
Becky and Ron had many travel adventures: taking trips on the Concord and Queen Elizabeth Il, to Europe, San Francisco, New York for Broadway shows, and 5th Avenue. On all travels he always searched out the best hotels and checked with the concierge for the best restaurants.
Since they had no children, their parental love was lavished on their rescue dogs, the late and much adored Sammy, Scruffy, Murffy, Abby and the current center of attention, Heidi.
Ron is survived by his wife, Becky and cousin Katie Leeman, his sisters-in-law Lucy Weaver,
Susie Ryan, Sarah Apperson (Gordon), Ike Day (Tom), Mitzi Hund (Ken), Louise Pieper (Dan),Teresa Vollenweider, and brother-in-law, Charlie (Kathy) and many nieces and nephews. We will all miss YOU, Ron. Until we meet again.
The family suggests memorial contributions in Ron's memory to KC Pet Project, 7077 Elmwood
Avenue, Kansas City, MO, 64132 ; Ron and Becky Eiman, William Chrisman Class of 52
Scholarship Fund, Independence Missouri School District Foundation, 201 North Forest Avenue, Independence, Missouri 64050;
Job One, 1085 South Yuma Avenue, Independence, MO 64056
Visitation will be held 12:00-2:00 pm on Wednesday, June 23, 2021 at Speaks Suburban Chapel, 18020 East 39th Street, Independence, Missouri. A memorial service will follow. Inurnment will be at Floral Hills, 7000 Blue Ridge Boulevard, Kansas City, Missouri 64133. On-line condolences may be made at www.speakschapel.com