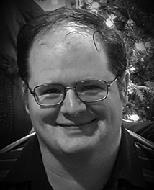 BORN
1979
DIED
2019
Sean Holland Wilde Sean Holland Wilde passed away peacefully at his home in Overland Park, KS, on August 10, 2019, surrounded by the love of his family. Sean died at the age of 40, after a period of declining health. Sean was born May 31, 1979 in Louisville, KY. He is the son of the late Diane Faris Wilde and the late Glenn Holland Wilde, both of Overland Park, KS. Sean attended the Miller School of Albemarie in Charlottesville, VA, a college preparatory school, graduating in 1998. Sean graduated from Emory and Henry College, Emory, VA, in 2003 with a Bachelor of Arts degree in Geography and History. In 2009, Sean earned a Bachelor of Science degree in Geography and an Undergraduate Certificate in Geographic Information System (GIS) from Kansas State University, Manhattan, KS. In 2013, Sean earned his Masters in Business Administration from the University of Saint Mary in Overland Park, KS. Sean worked in the Product Management field in the Kansas City, KS, metropolitan area. His colleagues noted that that he was an amazing individual with a sense of humor that is truly missed. Sean's many years of volunteer work with the Boy Scouts of America brought him a significant amount of joy in life. He felt blessed to have had the opportunity to make a difference in so many people's lives, especially young people. Sean was truly gifted in working with young people, providing guidance, being a mentor and adding some humor into everyday life. Sean was a Cub Scout as a youth and a Scouter as an adult. Sean started his adult chapter of Scouting in 1998 in Venturing Crew 79 in Emory, VA (Sequoyah Council). He served as Crew Associate Advisor, Crew Advisor, Troop Assistant Scoutmaster, Webelos Den Leader, Assistant Cubmaster, Camp Commissioner, Unit Commissioner, Scoutlink Regional Coordinator for U.S. and Canada (Jamboreee on the Internet), Elangomat for the Order of the Arrow, Camp Scoutmaster, Troop Committee Member and Troop Scoutmaster. He completed his Wood Badge Course (SR-420) at Camp Davy Crockett in TN. He served on camp staff at Camp Shenandoah (Swoope, VA), Camp Davy Crockett (Whitesburg, TN) and Dane G. Hansen Scout Reservation (Kirwin, KS). He served on staff for Day Camp, Cub Scout Resident Camp and Webelos Resident Camp. He was inducted into the Order of the Arrow by the Sequoyah Lodge #184 in 2001 and sealed his membership in 2002. In 2003, he became an Order of the Arrow Member of the Tamegonit Lodge #147 at Theodore Naish Scout Reservation and joined Boy Scout Troop 251 in Overland Park, KS. In 2005, he was inducted into the Tribe of the Golden Eagle at Dane G. Hansen Scout Reservation. In 2013, he became an Honorary Warrior, under the name of Chattering Fox, in the Tribe of Mic-O-Say at H. Roe Bartle Scout Reservation. In 2016, he became a dual BSA member of Cub Scout Pack 3010 in Leawood, KS. Sean loved animals. He particularly loved Golden Retrievers and the many cats in his life over the years. He fondly talked about his childhood golden retriever, Sunshine. She started his love for the golden retriever breed during his life. Sean is survived by two siblings, brother T.J. Hill of Boulder, CO, his wife Ann Michelle Hill, and their two children, and sister Cindy Wilde Bouchard of Holly, MI, her husband Kent Bouchard and their daughter. A memorial service will be held on Saturday, August 17, 2019 at 10:00 am at Church of the Holy Cross, 8311 W. 93rd Street, Overland Park, KS. A reception will follow at the church. Burial will be private with his family at a later date. The family has asked that memorial contributions be made to the Boy Scouts of America in Sean's honor. Online condolences may be expressed at www.amosfamily.com. (arr. The Amos Family Funeral Home 913-631-5566)

To plant trees in memory, please visit our Sympathy Store.
Published by Kansas City Star on Aug. 13, 2019.
MEMORIAL EVENTS
Aug
17
Memorial service
10:00a.m.
Church of the Holy Cross
8311 W. 93rd Street,, Overland Park,, Missouri
Funeral services provided by:
Amos Family Funeral Home
GUEST BOOK
Sponsored by Kansas City Star.
1 Entry
I first met Sean when he was a student at Emory & Henry College back in 1998. We became good friends over the next five years and kept in touch for several years after he graduated in 2003. Sean always had a big smile and positive outlook on life. He could make me laugh and lift my spirits whenever I had a bad day. During one trip we took to Whitetop Mountain, Sean was showing me a path that his Boy Scout troop (I believe it was Troop 79) had built. We were searching for the infamous "Lover's Leap" overlook near the top of the mountain. We were both pretty confident that we could find it since we had been there once before but it had been awhile. Somehow, we veered off the trail and ended up well below the overlook. When I pointed upward and said, "Isn't that Lover's Leap UP THERE?" Sean literally fell on the ground laughing when he realized we had gotten off the beaten path. This story may not sound as funny reading it, but it certainly gave us both a laugh that day. I will sure miss you, Sean, but I know that you are with God now and enjoying the best health once again. I pray now that God will comfort your family and reassure them that you are in the best hands now.
David Baber
August 20, 2019