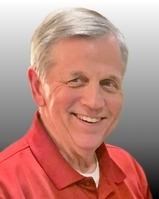 BORN
September 21, 1948
DIED
February 21, 2021
Steven G. Knight
February 21, 2021
Lee's Summit, Missouri - Steven G. Knight, 72, passed away on Sunday, February 21st surrounded by his wife, their three daughters, and his brother as he entered the Kingdom of Heaven for a glorious reunion with those he loved who had gone before him.
Steve was born in Kansas City, MO on September 21, 1948 to Bernard and Blanche (Cooper) Knight. He was a 1966 graduate of Marysville (KS) High School, earned a B.S. in Political Science from his beloved K-State (EMAW!) in 1970, and he also served in the Army National Guard.
He married his best friend and soulmate, Pam Markey, on June 3, 1972 at Visitation Catholic Church in Kansas City, MO, and they became the parents of three daughters. Family was everything to Steve and he was a shining example of what a father should be. He was the husband that bought flowers for every occasion and made "Steve's Big Breakfast" on he weekends. He eventually became the Pop who made those same breakfasts, attended countless softball & basketball games, and lit up when he was spending time with his six grandchildren.
Steve worked in the mortgage banking industry for 40 years until his retirement in 2014. At that time, he was given a Lifetime Achievement Award by the Mortgage Bankers Association of Kansas City. By all accounts, he was known as a man of his word, a great guy to work with, and a mentor to many.
Steve was a member of the Leawood Rotary Club for several years and was named a Paul Harris Fellow. He also volunteered with Keeler Women's Center in KCK where he was instrumental in securing support to fund the center's financial literacy classes. He also performed countless acts of kindness for others whenever the opportunity arose.
Steve lived his life to serve the Lord and take care of others. He was a registered organ donor and now three families have been blessed in the same way his was when Pam received a new kidney last year. He was a beautiful soul and he will be greatly missed.
Steve was preceded in death by his parents, Bernard and Blanche Knight, and sister-in-law, Ann Knight. He is survived by his wife and best friend of nearly 49 years, Pam, of Lee' Summit, their three daughters, Jennifer Lehr (Kevin) of Prairie Village, Amy Spitaleri (Tom) and Brooke Bonadonna (Michael), all of Lee's Summit, and brother Peter Knight of Buffalo, MN. Steve's legacy also lives on through his six beautiful grandchildren, Lauren, Leah, and Toni Spitaleri and Mia, Joe Mike, and Sofia Bonadonna who were the light of his life.
The Rosary will be prayed at 4:45 p.m. followed by visitation 5-7 p.m. on Sunday, February 28, at Our Lady of the Presentation Catholic Church, Lee's Summit, MO. The funeral Mass will be 11 a.m. Monday, March 1, at the church, followed by burial at Mount Olivet Cemetery, Raytown, MO. Masks and social distancing are required for the services. For those unable to attend in person, the Mass will be live streamed on YouTube at https://youtu.be/qd50czBgtXU
Contributions in Steve's honor can be made online to the Keeler Women's Center by visiting www.keelerwomenscenter.org or the Midwest Transplant Network at www.mwtn.org/make-a-monetary-donation
Complete obituary available at www.passantinobros.com

To plant trees in memory, please visit our Sympathy Store.
Published by Kansas City Star on Feb. 26, 2021.
MEMORIAL EVENTS
Feb
28
Rosary
4:45p.m.
Our Lady of the Presentation Catholic Church
, Lee’s Summit, Missouri
Feb
28
Visitation
5:00p.m. - 7:00p.m.
Our Lady of the Presentation Catholic Church
, Lee’s Summit, Missouri
Mar
1
Funeral Mass
11:00a.m.
Our Lady of the Presentation Catholic Church
, Lee’s Summit, Missouri
Funeral services provided by:
Passantino Bros. Funeral Home - Kansas City
GUEST BOOK
16 Entries
Steve and Pam were wonderful neighbors for many years. I so much enjoyed our chats over the back fence where we discussed and critiqued all the current events from the Royals and Chiefs to the other neighbors. Most but not always in a positive light. Barb and I missed them dearly when they moved from Leawood to Lee's Summit. Steve was just a great guy and a role model to many. Pam, our thoughts and prayers go out to you and the family. May he RIP. Rick
Rick mingori
Friend
March 9, 2021
I was saddened to read about Steve's passing in the Marysville Advocate. The first thing that came to my mind when thinking of Steve is that he "was a good guy". He was a classmate at MHS ; Class of '66. And also at KSU, 1970. I appreciated his work with our high school reunions for many years. He was truly a "giver", not a taker. His family and friends will have many wonderful memories to carry them through this time of sorrow. You are all in my thoughts and prayers. May God Bless you all.
Tom Mulvany
Classmate
March 8, 2021
Praying for the family - peace be with all.
Karen White
March 1, 2021
Steve brought calmness to any room or any situation. He was a wonderful friend and co-worker. Thoughts are with Pam and the girls and the entire family. Peace be with you.
Vern Lynn
February 28, 2021
Almost every week I would pull out a Thank You card from my card box and write my BEST friend my note for that week.
Your husband and your DAD was truly one of a kind.
He made me laugh about our days in Marysville; he counseled me how to approach getting our mortgage loan here in HHP; and of course we talked KSU and Royals’ sports!
But, maybe most importantly we discussed our spiritual questions together.
I am now comforted that he is sitting in “the garden of Heaven” getting of those answers and someday hopefully I’ll be able to join him there so he can do what he did best and that is “TEACH” us all. Blessings Suzy and Ray Makalous
Ray Makalous
Friend
February 27, 2021
What a prince of a guy. I always enjoyed the rotary projects for the Esay family and other projects. He had a awesome attitude of giving.
Ken Sanderson
Friend
February 26, 2021
So sorry for your loss of this incredible husband, father, and grandfather. Praying that the powerful presence of God will carry you through this time of sorrow. May the Holy Spirit fill your aching hearts with comfort. May his memory be a blessing to all who know and love him. (from Meghan Kesse Freier's aunt) Brooke, I have been praying for your dad and your family since Meghan first told me. Continuing to hold you in prayer.
Louisa Serrobe Beilan
February 26, 2021
Ed and Kathie Davis of Universal City, Tx want to offer our deepest sympathies to Steve’s family. Ed was a cousin to Steve and grew up with him in Marysville, KS. Ed has lots of great memories of Steve and his parents. We were so sorry to hear of his passing.
Ed and Kathie Davis
Friend
February 25, 2021
Steve has been a family friend for many many years. His passion for life was contagious to anyone around him. Our lives are so much better for having known Steve. He will truly be missed by not only his loving family, but by everyone he touched. Rest well friend for a well lived life.
Julie Hackenmiller
Friend
February 25, 2021
Thank you Steven for your service to our country. Because of your service; we can all live our lives in freedom. Our National Guard does allot for our country and also takes care of all of us when they are deployed.
ALL OF OUR VETERANS ARE OUR COUNTRY'S SPECIAL HEROES AND THEY WILL ALWAYS HOLD A VERY SPECIAL PLACE IN MY HEART FOREVER.
God bless you for serving our country with LOVE; HONOR AND PRIDE. You rest now in heaven in the arms of God and the Angels and with all of our veterans that served our country.
Linda Peterson
February 25, 2021
Coach was just one of the finest. Teacher, mentor, guiding hand. Always had a kind word of encouragement. R.I.P. Coach and thank you, for everything. My prayers and condolences to the family.
David Parre
Student
February 25, 2021
Brooke , Michael and family, our condolences for the loss of your father. You are in our prayers. God Bless!
Sandra and Bob Messina
February 25, 2021
Steve was such a good friend, stayed in touch with me thru the yrs since HS Graduation! Always enjoyed pics of his beautiful girls and lovely wife Pam, was so good to finally meet her at a class reunion! Steve dearly loved class reunions and see what everyone was up to! He will truly be missed May God bless and protect you Pam and family!
Connie Owens
Friend
February 25, 2021
Dear Knight family,

We are saddened to hear of Steve's passing. You are all in our prayers
Matt & Mary Ann Jonas
Friend
February 25, 2021
Steve Knight was a prince among men. Although he was a year older than I, we became and remained good friends during our years at St. Gregory’s School and Marysville High School. I always enjoyed visiting with Steve whenever he came home to visit. He will truly be missed. Sleep well, my friend!
Francis &#8220;Butch&#8221; Schmitz
Friend
February 25, 2021
My prayers and love go out to the family. Steve always treated me like his own son when I was younger and I will never forget his kindness and smile when I would make a wise crack about something.
Joe Gimmarro
Friend
February 25, 2021