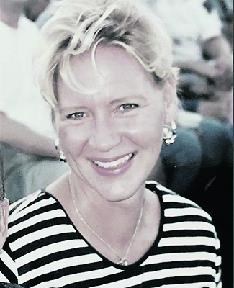 BORN
1960
DIED
2017
ABOUT
Shawnee Mission South High School
TERESA ANN ENENBACH Teresa Ann Enenbach died on Thursday, December 21, 2017, at her home, surrounded by nieces, nephews and siblings. The cause of death was cancer. She was 57. Teresa, the fourth of six children, was born on Dec. 4, 1960 in Columbia, MO, to James Edward and Dorothy Marie Flaspohler. After the death of James Edward in 1966, Dorothy remarried in 1970 and the family moved to Prairie Village, KS. There Teresa attended Cure of Ars and was graduated from Shawnee Mission South High School in 1979. She later received degrees in French and Elementary Education from The University of Kansas. Teresa was wicked smart, and at 5'10" and blonde was as striking physically as she was intellectually. An insatiable curiosity drove Teresa to explore the world through travel, reading and research, and she could converse intelligently about almost any topic - in French or in English. She did not suffer fools gladly and woe be to those who attempted to move her with half-baked theories or ill-formed arguments. In addition to being blessed with wit and smarts, Teresa's presence was that of a roaring, embracing human hearth, whose arrival at an event was announced with a boisterous, contagious laugh and genuine embrace that made it clear to everyone that the fun would now begin in earnest. She instantly connected with everybody - family, friends and strangers - and had a gift for identifying and zeroing in on the unique and compelling features of those she engaged, making fast and loyal friends at every turn. Teresa neither embraced nor let herself be bound by the traditional roles of work and gender. Her standards of conduct and success were, however, infinitely higher and more challenging than most. In the words of E. E. Cummings, Teresa was, "more brave than me: more blond than you." A renaissance woman and polymath, Teresa did not cook (but loved to pen recipes for her sister Julie to try); loved to come up with unique nicknames for people she liked; enjoyed everything about movies and made it quite clear that one should not dare call her during the Oscars; was the all-time, absolute, favorite aunt of every niece and nephew in the family; always made you feel incredibly and uniquely special, and for that - more than anything - will remain forever in the hearts of those mourning her passing. A memorial service celebrating Teresa's life and legacy will be held at 10:30 a.m. Saturday, Feb. 3, at Church of the Resurrection (Wesley Chapel), 13720 Roe Ave, Leawood, KS 66224. If Teresa touched your life (in other words, if you ever met her) you are warmly encouraged to attend. Donations in Teresa's memory can be made to The Ronald McDonald House of Kansas City at www.rmhckc.org
Published by Kansas City Star from Jan. 10 to Jan. 14, 2018.
To plant trees in memory, please visit the Sympathy Store.
MEMORIAL EVENTS
Feb
3
Memorial service
10:30a.m.
Church of the Resurrection (Wesley Chapel)
13720 Roe Ave, Leawood, KS
MAKE A DONATION
MEMORIES & CONDOLENCES
Sponsored by Kansas City Star.
12 Entries
The world is a sadder place because we won't hear Teresa laugh again. She passed away physically, but emotionally and spiritually she will continue to live in the hearts and minds of the people that knew and loved her, and it is in these hearts that Teresa will remain forever young.
John C.
Coworker
January 29, 2018
I didn't know Teresa very long, but we instantly became friends and were soon telling stories and sharing laughs.

I still turn to look for you, Teresa. Visiting Santa Marta just isn't quite the same without you giving me the 'stink' eye over something we observed!! Look out, Heaven. Here she comes!!
Peggy Marsh
January 19, 2018
TO THE FAMILY;