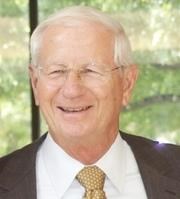 BORN
1939
DIED
2021
ABOUT
Rockhurst High School
FUNERAL HOME
McGilley Memorial Chapel
12301 State Line Road
Kansas City, MO
Thomas P. Klein "Pat"
November 2, 1939 - October 8, 2021
Overland Park, Kansas - Pat passed away peacefully on Friday Oct 8, 2021 at Shawnee Mission Hospital.
Visitation and Rosary will be held at 5:30 pm Thursday, October 28th at Church of the Nativity in Leawood, KS. The Mass of Christian burial will be held at 11:00 am Friday, October 29th at Church of the Nativity and live streamed at KCNativity.org. In lieu of flowers, donations may be made to Nativity Guardian Angel Fund.
Pat graduated in 1958 from Rockhurst High School. He then went on to Regis College in Denver, Colorado. He met his wife Judy at Loretto Heights College in Denver. They began their life together in 1961.
He began his career in the car business with Judy's father, Mel Hilliard Chevrolet. He then joined his Dad, Andy at Andy Klein Pontiac. He bought the dealership in 1974 after his Dad retired. Pat retired in December 2011.
Pat was an active member in the Serra Club, the Catholic community and Overland Park Rotary, and served on the Board of UMB Bank from 1975 to 2012.
Starting in 1995, Pat was active in the Kansas Motor Car Dealers and served on the Board of Directors from 1995 to 2011. He also was on the Board of Kansas Auto Dealers Workers Compensation Insurance Co until his retirement.
In 1998, Pat was the Kansas Time Magazine quality dealer.
Pat was an avid golfer, captain of his boat and a near-professional photographer and videographer.
The last 5.5 years he actively participated in boxing at Parkinson's Exercise & Wellness Center. Known as one of the "Fighters", he will be missed by all. His inspiring zest for life, his generosity to anyone in need shined in every step he took. His heart glowed with love for his friends, family and most of all his infectious "yippee".
He was preceded in death by his Mom & Dad, Lavonne & Andy Klein, Father-in-law and Mother-in-Law, Melvin & Alberta Hilliard.
He leaves behind Judy, his wife of 60 years, daughters, Kimberly, Kelly (Cliff), Kristi (Chat), Katie (Chris); grandchildren, Austin, Ashley, Abby, Wyatt, Payton, Hallie, Madison (Jerry B), Harrison, Hunter, Holland, Cooper; his brothers and sisters Mike (Nancy), Gary (Chris), Larry (Ann), Mary (Mike), Steve (Janet), Kayt (Peter), Susie (Mike), Linda (Butch); sister-in-law Vicki, and many nieces and nephews.
Pat's motto in life, "Faith, Family, Friends" will be remembered by all.

Published by Kansas City Star from Oct. 24 to Oct. 27, 2021.
To plant trees in memory, please visit the Sympathy Store.
MEMORIAL EVENTS
Oct
28
Visitation
5:30p.m.
Church of the Nativity
Leawood, MO
Oct
29
Mass of Christian Burial
11:00a.m.
Church of the Nativity
Leawood, MO
Funeral services provided by:
McGilley Memorial Chapel
MAKE A DONATION
MEMORIES & CONDOLENCES
Sponsored by Kansas City Star.
3 Entries
Our condolences go out to the whole Klein family. Mr. & Mrs. Klein sure did a wonderful job raising 4 wonderful daughters. Hang in there Judy & girls, you have great family of support.
pat & kathy ryan
Other
November 24, 2021
I was so sorry to hear about Pat's passing, he was the nicest man! You will all continue to be in my thoughts and prayers.
Diane Jolley Barkley
Friend
October 28, 2021
I am saddened to hear the news of Pat's passing. He was one of a kind. I enjoyed my many years of working for this man. My deepest condolences to Judy, their daughters and the rest of the family,
Robin Farley
Work
October 25, 2021
Showing 1 - 3 of 3 results